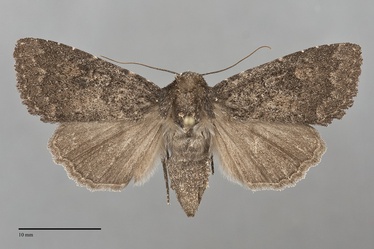 Aseptis ethnica is a broad-winged, medium-sized to large moth (FW length 18–19 mm) that flies in southwestern Oregon during the summer. It has a slightly mottled dark blackish-brown forewing that is broadly triangular and has a slightly scalloped outer margin. It is nearly uniform dull dark gray-brown to blackish brown in the Northwest, slightly lighter in the terminal area. A few lighter brown spots are present along the costa, likely the pale filling of the lines. The course of the postmedial line is marked by small black spots on the veins in some specimens. The subterminal line is tan to brown, powdery, vague, and diffuse, irregular. The fringe is concolorous with small tan or brown spots in the base at the tips of the veins. The orbicular and reniform spots are weakly outlined in gray, although the orbicular spot is black in a few specimens, and are located near to each other. The orbicular spot is round, filled with the ground color. The reniform spot is kidney-shaped, filled with dark gray to black. A gray to black claviform spot is evident in some specimens. The hindwing has slightly concave segment posterior to M1, although less prominent than in many other Aseptis species. It is dark gray-brown with dark veins and terminal line. The hindwing fringe is gray with a tan base. The head and thorax are the same color as the forewing. The male antenna is bead-like.

This species and Aseptis fanatica can be recognized by their broad dull dark black-brown forewings and dark hindwings with a concavity along the outer margin but are difficult to tell from each other. Aseptis ethnica is slightly larger and has a broader wing. It is slightly lighter in color and more powdery, especially on the distal wing where its subterminal line is more diffuse than that of A. fanatica. Females of Aseptis fumosa are dark, but have black outlines of the forewing spots that are more prominent than those of A. ethnica. Amphipyra tragopoginis is brown and broad-winged but has a sheen on the wings entirely unlike the matte powdery wings of Aseptis. Its forewing spots are small and black, and the base of its hindwing is much lighter than those of A. ethnica.

Populations of A. ethnica are geographically variable. Specimens from the southern part of its range in California are much lighter than those from the Pacific Northwest, ranging from gray-tan to mottled reddish brown.

The larva is smooth, green with fine blue mottling and a thin white lateral stripe.  The prolegs are contrastingly pink.  It is illustrated by Miller & Hammond (2003).

This species is found in West Coast dry forests and brushlands with manzanitas.  In the Pacific Northwest, it is moderately common on dry rocky ridgetops, in open clear-cuts, in manzanita brushlands, and in oak woodlands.

The range of this species is incompletely known due to confusion with Aseptis fanatica and appears to have a more limited range in our region.  It is most common in the Siskiyou Mountains and Cascades of Oregon, reaching the southern Washington Cascades.

This moth is restricted to California outside of the Pacific Northwest, reaching as far south as the border with Mexico.

The flight period of A. ethnica is summer, usually during July and August. It is nocturnal and comes to lights.