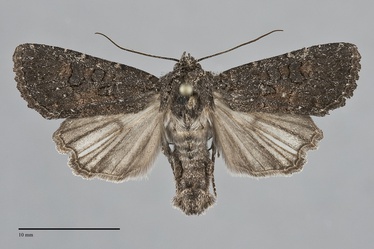 Aseptis fumosa is a medium-sized moth (FW length 15–17 mm; Wingspan: 34.9 ± 1.5 mm (n = 25; range 31.5–38 mm)) that flies east of the Cascade Mountains during the summer. It has dull, blackish-gray forewings with black-outlined spots, and whitish hindwings with sooty veins in males and gray hindwings in females. The forewing has a scalloped outer margin and the hindwing has a concave "notch" in the the outer margin posterior to M1 that is typical of the genus Aseptis. The forewing is nearly uniformly blackish gray, slightly browner in the lateral and posterior median area and at the apex in some specimens. The spots are slightly darker gray, mostly evident as slightly lighter brown-gray filling. The antemedial line is weakly excurved. The median line is very faint. The postmedial line is weakly toothed with spots on the veins near the tips of the teeth in some specimens, nearly straight near the lateral reniform spot and slightly angled toward the base below the spot. The subterminal line is brownish, vague, irregular without a significant W-mark or preceding dark marks. The fringe is concolorous with small pale brown spots at the ends of the veins.  The orbicular and reniform spots have black outlines and are filled with purplish dark gray. The claviform spot is small to moderate size, filled with the ground color. The hindwing of males is pale whitish gray, darker smoky gray anterior to M1 and posterior to M3, with diffuse darker veins that have a radiating pattern, a dark discal spot, and thin terminal line; those of females are more even dark brown-gray without a pale area distal to the discal spot or contrasting veins. The hindwing fringe is gray with a darker brown and gray base. The head and thorax match the forewing color. The male antenna is weakly beaded.

This moth can be recognized by its blackish gray forewing - the species epithet fumosa means "smoky" - with black outlines of the spots and a hindwing with a notch in the outer margin. The hindwing pattern of males is distinctive. Females could potentially be confused with Aseptis ethnica or Aseptis fanatica. Both of these moths have dark gray forewings, but these are broader than those of A. fumosa and lack complete dark outlines of the reniform spots. Condica albolabes, a rarely collected moth that flies over barren lava flows in the Cascades of Oregon, is similar to A. fumosa but differs from it in having white spots on the lines and in the reniform spot.

The similar species Aseptis perfumosa is found in California and could potentially occur in southern Oregon. It is commonly confused with A. fumosa in collections and looks quite similar, especially when worn.  A. fumosa is on average a bit larger, has slightly broader forewing and males have paler hindwings.  These two species also have very different male genitalia.

Larva is smooth, green with a thin white subdorsal stripe and a broad red and white lateral stripe.  It is illustrated by Miller & Hammond (2003).

Aseptis fumosa is widespread east of the Cascades as far north as southern British Columbia. The range extends east to the western Panhandle in northern Idaho and to the border with Wyoming in the southern part of the state. It is limited to southwestern Oregon west of the Cascade Mountains.

This moth is known from western North America, mostly west of the Rocky Mountains. It has been found throughout California and in the Intermountain region to the south of the Northwest. It occurs in Colorado in the Rocky Mountains, and the range extends east to Nebraska on the Great Plains.

This species feeds primarily on bitterbrush (Purshia tridentata) in the Rosaceae in ponderosa pine forests and juniper woodlands east of the Cascades.  Along the summit of the Cascades and in southwestern Oregon, it primarily feeds on species of snowbrush (Ceanothus spp.) in the Rhamnaceae. In southern California, it has been raised on Cercocarpus and Adenostoma fasciculatum (both in Rosaceae).

The flight period of A. fumosa is summer. It has been collected from late May to mid-August in the Northwest. Adults fly at night and come to blacklight.