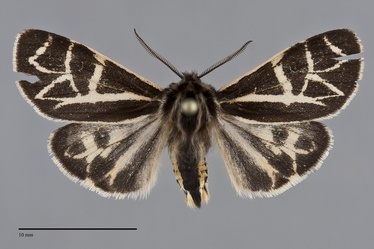 Apantesis elongata is an uncommon, day-flying alpine and subalpine Apantesis with white hindwings in males and orange hindwings in females. It is a medium-sized moth (FW length 15–16 mm). The forewing appears black with limited off-white markings, predominantly the medial, postmedial, and subterminal transverse lines and the longitudinal postcubital line. There is also a thin line of pale scales along the cubital vein at the inferior margin of the cell. The hindwing color is sexually dimorphic, white to off-white in males and pale orange in females, rarely entirely dark. The hindwing markings are fairly extensive, with a large discal spot, marginal spots usually fused to the marginal band (more often separate in females), and longitudinal black lines along the cubital vein below the discal spot and along the medial margin. The body is black with reduced off-white to tan markings in most individuals. The black antennae are moderately bipectinate in males and biserrate in females. The eye size is reduced, measuring less than 0.6 mm.

Apantesis elongata is unlikely to be confused with other species in the southwestern portion of its range. In the Rocky Mountains it can be confused with Chelis sordida and orange forms of Apantesis williamsii. Chelis sordida is easily distinguished by the lack of pale forewing longitudinal markings. Pale A. williamsii lack pale scaling along the cubital vein, have a less curved postmedial region pale line, and have eye size larger than 0.6 mm (Schmidt 2009).

This species is found at high elevations in subalpine mountain meadows and on alpine tundra above timberline.

Apantesis elongata has been most commonly found in the south British Columbia Coast Range and the northern Cascade Mountains. It also occurs in mountains further east in British Columbia, Washington, and western Montana.

The Pacific Northwest encompasses most of the global range of this species. It also occurs in the Rocky Mountains of Alberta.

This species probably uses various herbaceous plants as with other species in the genus. A last instar larva found at Gott Peak, British Columbia collected by Lars Crabo on July 11, 2010 was reared to maturity on dandelion (Taraxacum officinale).

Adults are diurnal and are most commonly collected in the afternoon, although Schmidt (2009) writes that some individuals are collected at light. Males fly rapidly over tundra. Most records are from July to mid August.