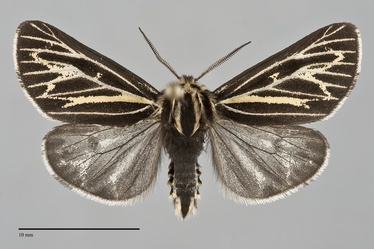 Apantesis quenseli is a small Apantesis (FW length 14–15 mm) that is found on alpine tundra in northern British Columbia. The forewing appears black longitudinally streaked with creamy white veins. The transverse lines are usually limited to two transverse bars near the end of the cell and the zigzag postmedial region in western Nearctic populations. The hindwing is sexually dimorphic. That of males is usually smoky dark gray with barely evident markings, occasionally lighter similar to those of females. Those of females are usually light orange, occasionally paler off-white, with black basal area, discal and submarginal spots, and irregular marginal band. The fringes of both wings are cream in both sexes. The head and thorax are creamy white, with black stripes on the collar, tegulae, and central thorax. The abdomen is black with cream and orange markings laterally. The antenna is bipectinate in males, simple in females, and the dorsum is pale basally and black distally.

Males are similar to Chelis sordida, another black and white alpine tiger moth. These species are easily separated because A. quenseli has extensive pale veins, limited to the wing base in C. sordida. Females of A. quenseli resemble Apantesis speciosa. This species lacks all transverse lines other than the postmedial region line, including the pale bar near the end of the cell found in all A. quenseli. The basal antennae of A. quenseli is pale, black in A. speciosa.

This is an arctic and alpine species that occurs in alpine tundra at high elevations in the northern Rocky Mountain region.

Apantesis quenseli is found in the northern Rocky Mountains of northeastern British Columbia. It has not been found further south in western North America.

This species is found in Eurasia as well as in North America. Nearctic populations outside the Pacific Northwest are distributed from Alaska and Yukon Territory to Labrador. Isolated populations occur further south on Mt. Albert on the Gaspe Peninsula, Quebec and in the White Mountains of New Hampshire.

No specific foodplant records are presently available, but it probably feeds on various herbaceous vegetation in arctic-alpine habitats.

Adults are diurnal and are usually netted on the wing or found crawling over alpine vegetation. They are found in mid- to late summer.