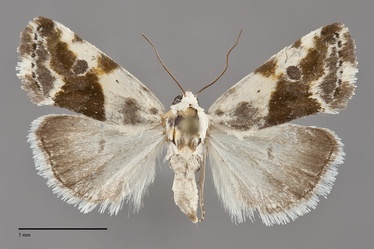 Ponometia candefacta is a very small (FW length 9 - 10 mm) white, gray, and olive-gray moth with a gray and white forewing fringe that flies in arid environments during the summer. The forewing ground color is pure white. Vestiges of the basal and antemedial lines are evident as gray patches on the wing base. Two dark gray spots are located on the costa at the positions of the median and postmedial lines. The dominant forewing marking is a gray and olive-gray band that extends from the positions of the median and subterminal lines through the reniform spot to the apex, thinning anteriorly. The white subterminal line separates this band from the gray terminal area. A row of dark spots forms the terminal line. The fringe is white with gray opposite the cell and at the anal angle. The orbicular spot is a tiny black dot. The reniform spot is a perfect circle, pale with a purplish gray center. The hindwing is pale whitish gray, darker in females, becoming gradually darker gray to the margin on the outer half. The hindwing fringe is white. The head and thorax are pure white. The male antenna is filiform.

This species is most similar to Ponometia elegantula and Ponometia binocula in our region. The former species is widespread in the arid Northwest while the latter is restricted to the eastern portions of British Columbia and Idaho in our area. The gray band on the forewing of P. elegantula extends to the costal margin medial to the reniform spot; the costa remains white distal to the spot in P. candefacta. The shape of the dark area is more similar in P. binocula, but its forewing fringe is pure white without gray areas and it lacks the dark spot on the costa at the postmedial line and markings on the base of the wing that are present in P. candefacta.

Larva is smooth with only two pairs of abdominal prolegs.  The color is green with a white lateral stripe.  It is illustrated by Powell & Opler (2009).

This species is widely distributed throughout much of North America in dry, weedy, disturbed habitats at low elevations, including agricultural lands and urban areas.

This species has been collected most commonly in Washington's Columbia Basin. It is probably more widespread and should be sought in southeastern Oregon and southern Idaho.

Ponometia candefacta is widespread in North America from the northern United States to southern Mexico and appears to be ubiquitous to northern Maine, northern Minnesota, and southern Montana. It appears to be least common in the Pacific Northwest and the central Great Basin.

This species is a foodplant specialist feeding on various Asteraceae, including asters (Aster spp.) and ragweed (Ambrosia spp.).

This species flies during the summer and has been collected from June through August in our region. It is nocturnal and comes to lights.