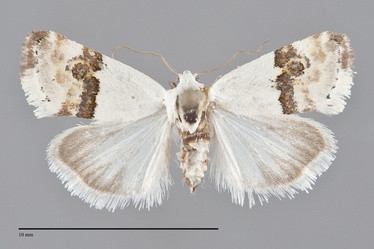 Ponometia elegantula is a very small (FW length 8 - 10 mm) white and gray moth that flies in arid environments during the summer. Its predominantly white forewings are gray near the apex and have a gray-filled reniform spot and outer fringe. The forewing ground color is pure white. It lacks all markings medial to the gray median line which extends straight across the wing except for a small notch next to the reniform spot. The distal wing is light brown-gray in the subterminal area and light gray in the terminal area separated by pale lines. The terminal line is a series of small black dots. The fringe is predominantly gray anteriorly and white posterior to the level of the cell. The reniform spot is round, pale and filled with gray similar to the median line. The other spots are absent. The head and thorax are white. The male antenna is filiform.

This small species resembles several other members of the subfamily Acontiinae but can be identified by its small size and the straight medial border of the median line.

This species is widely distributed in dry rangelands and grasslands at low elevations throughout much of western North America, and is frequent in such habitats of the Pacific Northwest east of the Cascades.

Ponometia elegantula is found in the dry interior steppes of the Northwest. It has been collected in the Columbia Basin, in southeastern Oregon, and in the Snake River Plain of southern Idaho.

The range of this species extends through western North America as far north as south-central Alberta. It is common throughout most of California, the Intermountain Region, and the southern Rocky Mountain states. The most easterly records are from Nebraska and southern Texas.

No information is presently available regarding larval foodplants of this species, but it probably feeds on Asteraceae like closely related species.

Ponometia elegantula flies during the summer and has been collected from early June to mid-August in the Northwest. It is nocturnal and comes to lights.