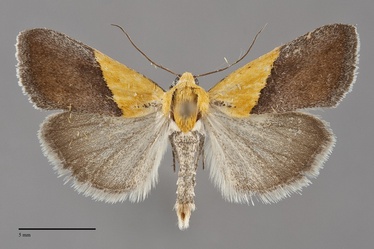 Ponometia semiflava is an unmistakable small moth (FW length 10 - 11 mm) that flies in the eastern part of the Northwest during the summer. It has a bright yellow body and wing base and purplish brown distal forewing. The demarcation between yellow and brown on the wing is straight and oriented obliquely across the forewing, closest to the base at the trailing margin. The distal forewing is slightly lighter gray at the costa. All lines and spots are absent. The hindwing is light gray in males and dark gray in females, darker toward the margin, with a lighter gray fringe.

This species is easily identified by its yellow and brown forewing.

This species is widely distributed throughout much of North America, but in the Pacific Northwest, it is very narrowly restricted to montane habitats at middle elevations in the northern Rocky Mountain region.

Ponometia semiflava is found toward the eastern part of the Northwest. It has been collected most frequently in the Blue Mountain region of southeastern Washington and the adjacent portions of Oregon and Idaho. It has also been found in southeastern British Columbia.

This species is distributed across the southern portion of the United States, extending north into western Canada. It has been most commonly collected in the Southeast south of North Carolina and Kentucky and in the southern Great Plains south of southern Nebraska and southern Wyoming. The range extends north to Wisconsin in the Midwest and central Alberta in the Great Plains. Ponometia semiflava is uncommon further west where it occurs in the southern parts of Arizona, Nevada, and California.

No foodplant records are presently available for this species, but it probably feeds on Asteraceae like closely related species.  Previous records of Sarracenia pitcher plants are the result of taxonomic misidentifications in eastern North America.

This species flies during the summer and has been collected from early June through mid-August in our region. It is nocturnal and comes to lights.