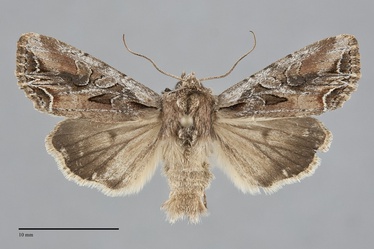 Lacanobia atlantica is a pale tan and red-brown, medium-sized moth (FW length 14 - 17 mm) that flies in a variety of habitats during the summer. It has a light gray costa, a black basal dash and inferior reniform spot, and a sharp "W" mark on the outer mid-forewing. The ground color is light grayish-tan, variably suffused with red-brown, always in the distal median area beyond the reniform spot and in the subterminal area and sometimes more extensively toward the base. The costa is light gray, except in the subterminal area. Dark gray fills the cell and the mid-forewing distal to the reniform spot. Gray-ochre is present anterior to the black basal dash on the wing base and forms diffuse streaks across the distal cell through the subterminal area, across the median area in the fold, and along the distal posterior margin. The subterminal area is pale tan to light gray along the dark veins at the W-mark. The terminal area is dark gray. The basal line is limited to a pair of gray spots on the costa. The antemedial line is gray, double-filled with tan, irregular, and nearly transversely oriented. The median line is a faint spot on the costa. The postmedial line is faint gray, filled with tan, weakly scalloped, nearly obsolete around the reniform spot and stronger below the spot where it is strongly angled toward the base. The subterminal line is tan to gray off-white, slightly irregular, offset toward the base at the costa and forming a sharply toothed W-mark on M3 and CuA1. The line is preceded by long black wedges on the mid-forewing near the W-mark and a red-brown shade posterior to this mark. The terminal line is a black line or a series of spots. The fringe is dark gray with tan lines across it at the ends of the veins. The orbicular spot is partially outlined in thin black, often open anteriorly,  and is a slanted ovoid filled with tan peripherally and gray centrally. The reniform spot is partially outlinted in black, very strongly posteromedially and open anteriorly, large, kidney- or figure-eight-shaped, filled anteriorly with a thin tan line peripherally and gray to red-brown centrally and posteriorly with dark gray similar to the adjacent wing color. The claviform spot is moderate-size, black, filled with dark gray. The hindwing is medium gray-brown, darker gray toward the margin, with gray discal spot, veins, and terminal line. The hindwing fringe is whitish-gray with a tan base. The head and base of the collar are tan, with a black line across the distal collar. The rest of the thorax is tan to red-brown with weak tufts centrally. The eye is covered with fine hairs. The male antenna is weakly beaded.

This species can be identified by its pale tan and red-brown forewing with light gray costa, basal dash, black and gray inferior reniform spot, and sharply-pointed W-mark. It is similar to Lacanobia subjuncta, appearing as a small form of it, but differs in the presence of the lights costa and absence of a black bar across the lower median area. Lacanobia atlantica is also similar to some forms of Trichordestra lilacina but it lacks the pronounced W-mark that is characteristic of all Lacanobia species.

This species is widely distributed in moist open forests throughout northeastern North America and in the Rocky Mountain region.  It occurs in salt marshes with pickerel weed (Salicornia) in western British Columbia and Washington. It is relatively rare and sporadic in the Pacific Northwest.

Lacanobia atlantica has an unusual distribution in the Pacific Northwest. It is found in grassland and open forest habitats in southern British Columbia but also occurs in salt marshes along the Gulf of Georgia on the coasts of British Columbia and Washington.

The range of this species extends to the Atlantic Coast in a narrow north-south distribution near the Canada-United States border, reaching Massachusetts to Nova Scotia. The range extends south to the northern portions of Colorado and Utah in the Rocky Mountain region.

This species is a broad generalist feeding on both hardwoods and herbaceous vegetation.  Foodplants include honeysuckle (Lonicera spp.) in the Caprifoliaceae, oaks (Quercus spp.) in the Fagaceae, willows (Salix spp.) and quaking aspen (Populus tremuloides) in the Salicaceae, and various herbs in the families Asteraceae and Fabaceae.

The flight period of L. atlantica is during the summer. Records from our region are from June and July. It is nocturnal and comes to lights.