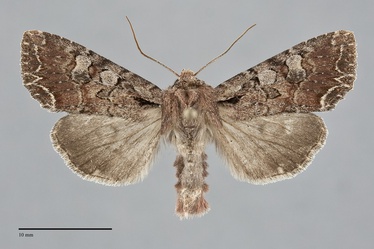 Lacanobia radix is a gray-brown and red-brown, medium-sized moth (FW length 16 - 18 mm) that flies in forests throughout our region during early summer. It has pale, gray-filled forewing spots, a light subterminal line that forms a prominent W-mark, and a thick black basal dash. The forewing has a slight notch along the outer margin near the anal angle. The color is smooth gray-brown, becoming red-brown in the lateral median area and subterminal area, and dark gray-brown in the terminal area. A short black dash is thickest at its distal end. The basal, antemedial, and postmedial lines are gray-filled with the gray color or a slightly lighter shade. The basal and antemedial lines are slightly irregular, with the latter oriented nearly transverse to the wing axis. The median line is gray-brown to red-brown, bent on the radial and cubital veins. The postmedial line is very variable, sometimes very weak and occasionally with a black inner component, very close to the reniform and touching its upper and lower corners, bent at the lower spot to meet the posterior margin at a right angle. The subterminal line is pale yellow, most often thin but complete, sometimes thick and very prominent, offset toward the base below the apex, forming a strong W-mark on M3 and CuA1 to the outer margin, and nearly straight elsewhere. It is preceded by a dark gray-brown or red-brown shade. Small dark dots form the terminal line. The fringe is concolorous with the terminal area, with light transverse lines at the ends of the veins in some specimens. The spots are large but faint, thinly outlined in dark gray to black, and filled with slightly lighter gray than the ground color, occasionally much lighter gray. The orbicular spot is round. The reniform spot is weakly kidney- to hourglass-shaped, with a dark gray filling of the lower half. The claviform spot is small and gray, except black in specimens with black lines and spots. The hindwing is medium-dark brown-gray, darker gray toward the outer margin, with a very weak discal spot and thin terminal line. The hindwing fringe is light brown-gray. The head and thorax are brown-gray to red-brown, with a black transverse line across the mid-collar. The eye is covered with fine hairs. The male antenna is weakly beaded.

This species can usually be recognized by its smooth gray and red-brown color, black basal dash, and light subterminal line with a strong W-mark. It has a more uniform brown forewing than our other Lacanbia species.

This species is widely distributed in moist forests across Canada and throughout the mountains of western North America.  In the Pacific Northwest, it is usually sporadic, uncommon or rare in coastal rainforests and mixed hardwood forests at low elevations west of the Cascades, and in mixed hardwood-conifer forests or spruce-fir forests at higher elevations in the Cascades and Rocky Mountain regions. It is commonly found in association with aspens (Populus tremuloides) east of the Cascade Mountains.

Lacanobia radix has a widespread distribution in forests throughout the Pacific Northwest. It occurs at least as far north as the Peace River region in north-eastern British Columbia and has been found on both sides of the Coast and Cascade Ranges.

The range of this species extends east in a narrow north-south band near the Canada-United States border, reaching New England, northern New York, and New Brunswick. In the West it has been found in the Black Hills of South Dakota and Wyoming, eastern Utah, northern Nevada, and the northern Sierra Nevada in California.

This species is a very broad generalist feeding on both herbaceous vegetation and hardwoods.  It may prefer birches (Betula spp.) and alders (Alnus spp.) in the Betulaceae, and willows (Salix spp.) in the Salicaceae, but has also been observed feeding on various herbs in the families Asteraceae, Fabaceae, and even grasses (Poaceae).

This species is single-brooded and flies in late spring and early summer. Records from museum specimens in our region extend from mid-May to mid-July. It is nocturnal and comes to lights.