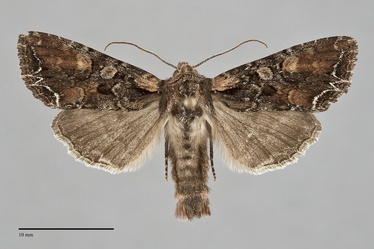 Lacanobia nevadae is a medium-sized noctuid moth (FW length 16 - 18 mm) that flies in high-elevation forests during early summer. It has dark gray and warm, dark, red-brown forewings with a busy pattern of lines and spots that include a basal dash, a white subterminal line with a W-mark at the margin, and a pale orange-brown patch at the anterior wing base. The ground color is dark brown-gray with a slightly purplish tint, dark red-brown in the median area distal to the reniform spot and in the entire subterminal area, and bright orange brown at the base anterior to a black basal dash. The basal line is two gray spots on the costa. The antemedial line has gray inner, and black outer, components and is filled with the ground color or a slightly lighter shade of it. The median line is dark gray and diffuse, usually evident but faint. The postmedial line is gray to black, double with stronger medial component, filled with the adjacent gray or red-brown, sometimes lighter gray, faint around the reniform spot and stronger near the posterior margin where it is angled toward the base. The subterminal line is pale gray anterior to the W-mark on M3 and CuA1, white from the top of the mark to the posterior margin, offset toward the base at the costa and slightly irregular elsewhere. The terminal line is dark, barely visible. The fringe is dark gray with tan lines across it at the ends of the veins. The orbicular spot is partially outlined in thin black, often open anteriorly, a slanted ovoid filled with the ground color or peripheral light gray and an ocellus. The reniform spot is partially outlined in black (strongly posteromedially and open anteriorly), large, kidney-shaped, and filled with dull orange-brown and red-brown anteriorly and the gray ground color posteriorly. The claviform spot is moderate-sized and black. The hindwing is slightly mottled with a slightly darker discal spot and thin terminal line. The hindwing fringe is whitish gray with a gray base, sometimes with a pink tint. The head and base of the collar are brown; the tip of the collar is dark gray distal to a black transverse line. The rest of the thorax is dark gray with brown edges on the medial tegulae. The eye is covered with fine hairs. The male antenna is weakly beaded.

This species can be identified by the orange patch on the anterior wing base, the red-brown subterminal area, and the white subterminal line that forms a strong "W" on the mid-forewing. It is unlikely to be confused with any other moth in its high-elevation forest habitat.

This species is widely distributed in moist forests across Canada and the mountains of the West.  In the Pacific Northwest, it occurs in high-elevation spruce-fir forests and mixed hardwood-conifer forests, and in ponderosa pine forests at middle elevations east of the Cascades. Northern populations occur in lower-elevation boreal forests. It is usually sporadic and uncommon to rare in most areas.

This species has a boreal forest and western mountain distribution. The range extends east through a narrow north-south zone near the Canada-United States border to Maine and Nova Scotia. It occurs in the Rocky Mountain region from central Alberta to Utah and Colorado. It has also been found in the northern Sierra Nevada in California.

This species is probably a generalist feeding on many kinds of plants.  It is best known for feeding on birches (Betula spp.) and perhaps alders (Alnus spp.) in the Betulaceae, but is also known to feed on some conifers.

The adults of this species fly in early summer and are often worn when collected with many other high-elevation species. The records in our region extend from late May to early August. It is nocturnal and comes to light.