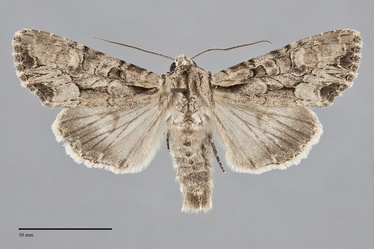 Lacanobia subjuncta is a medium to large moth (FW length 17 - 21 mm) that occurs in a variety to habitats throughout our region from spring to fall. It has mottled, red-brown to pale gray-brown forewings with a busy pattern of lines and spots, including a "W" mark where the subterminal line extends to the outer margin, large spots, and black basal and median dashes. The outer margin is slightly scalloped with a slight concave segment above the anal angle. The most common form has a medium-dark, slightly purplish, gray-brown ground color, lightest along the costa, especially at the base, and in the posterior subterminal area. Extensive red-brown is present, anterior to basal and median dashes, and as a flush in the distal median area and in the subterminal area that is strongest lateral to the reniform spot. The basal dash is strong and extends to the antemedial area. A black median line extends across the median area as a continuation of the posterior wall of the claviform spot. A series of black wedges and lines are present in the subterminal and terminal area near the "W" mark of the subterminal line. The basal line is absent. The antemedial line is gray (except for a short black segment across the cell), double, and filled a light shade of the ground color. It is excurved with teeth toward the base on the veins, strongest at the cubital vein. The median line is gray, evident as an oblique mark near the medial reniform spot. The postmedial line is double, faintly gray-filled with the ground color on the anterior wing and with black inner and gray outer components, filled with white below the cell, curved widely around the reniform spot and then concave toward the base, and strongly angled inward below the cell. The subterminal line is pale gray, and irregular, forming a very strong W-mark on M3 and CuA1 where it is associated with red-brown color and strong black wedges and lines. The terminal line is a series of black triangles. The fringe is dark gray with tan spots at the base at the ends of the veins. The orbicular spot is a large circle filled with light gray, lacking an ocellus, outlined in thin black, and often open anteriorly. The reniform spot is outlined in black, open anteriorly, large, kidney-shaped, filled laterally with the ground color medially and inferiorly, and is red-brown and ochre-brown elsewhere. The claviform spot is large, thin, and black, except on the posterior wall, which is a component of the median line. The hindwing is gray with a brassy sheen, with darker gray discal spot, veins, and margin. The hindwing fringe is whitish-gray with a gray base. The head and thorax are medium to dark gray with a black transverse line across the distal collar. The eye is covered with fine hairs. The male antenna is weakly beaded.

A paler form of this moth occurs in dry habitats. It is more uniform lighter tan-gray and lacks red-brown color. The lines and spots are similar as in the typical form.

Lacanobia subjuncta can usually be recognized by the gray-brown and red-brown forewing with large spots, black basal and median dashes, white filling of the posterior postmedial line, and a very strong "W" mark associated with black dashes. The round, pale orbicular spot without an ocellus is fairly characteristic. However, it resembles several other Lacanobia species as well as several Apamea species from the tribe Apameini. It can be told from L. nevadae, a high-elevation moth, by the absence of light orange-brown patches anterior to the basal dash at the wing base and similar filling of the reniform spot. Lacanobia grandis, found in forests, has a blue-gray band across the distal wing that L. subjuncta lacks. Several Apamea species, particularly Apamea longula, resemble the pale interior form of L. subjuncta but lack hair on the surface of the eye. Orthosia segregata, an early spring species found in forests in the northern and eastern parts of our region, is also similar but usually dark gray rather than brown and lacks the prominent "W" formed by the subterminal line in Lacanobia species.

The name L. s. eleanora (Barnes and McDunnough) was proposed for western populations of this species, but the range of variation and habitat forms suggests that the use of subspecies is not warranted.

Lacanobia subjuncta is found at low to middle elevations throughout the Pacific Northwest, including in dry interior steppe habitats and areas west of the Coast Range and Cascade Mountains.

This species is widely distributed in North America. The distribution in the East extends from Nova Scotia to Virginia, Missouri, and North Dakota. The list of states where it occurs in the West suggests that it is widely distributed, with records as far south as New Mexico, Arizona, and California (McCabe 1980).

This species has a long flight period and has been collected from late April to late fall in our region. It is most common during the summer, especially in June and July. McCabe (1980) states that it is double-brooded, likely the case in our region, although the phenogram does not show a clearly bimodal curve that is typical of most double-brooded species. This species is nocturnal and comes readily to light.

This species has been known to cause serious defoliation in fruit orchards, but is also a pest in various herbaceous crops.