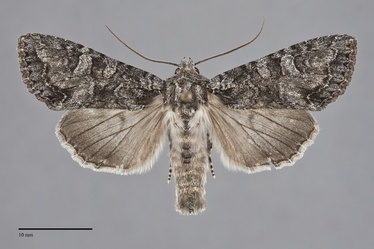 This species is common and widely distributed throughout much of  western North America in various dry habitats.  In the Pacific Northwest, it is common in dry, open ponderosa pine forests, juniper woodlands, and on open sagebrush steppe at low to middle elevations east of the Cascades, but may also be found on dry, rocky ridgetops at higher elevations in the Cascades.

Apamea occidens is common throughout our region east of the crests of the Coast and Cascade Ranges as far north as the Lillooet region of south-western British Columbia.

This is a western North American species. It is found from southern British Columbia and Alberta south to western Kansas, northern New Mexico and Arizona, and eastern California.

This species is a soil-surface feeding cutworm that specializes on grasses (Poaceae), and may prefer short bunchgrasses based upon the habitat.

This species has a relatively long flight season but is most commonly collected during the summer. Records from our region span late May to September, with most records from June and July. It is nocturnal and comes to lights, but it has been observed visiting flowers during the day under cloudy conditions.