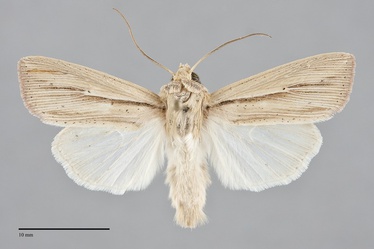 Leucania anteroclara is a medium-sized (FW length 16 - 18 mm), pale, yellow-tan moth that flies in steppe habitats during late summer and fall. Its streaked forewings have pale veins -- darker brown below the cubital vein, between the veins distal to the cell, and along the trailing margin -- and a white hindwing. The forewing is palest on the lower half posterior to the dark near the cubital vein and in an oblique area that ends at the apex. Scattered dark scales are present, especially along the trailing margin. A slightly darker brown to red-brown streak is present along the entire length of the posterior cubital vein. Less dark, thinner streaks are present between the veins distal to the cell and across most of the forewing parallel to the trailing margin. The veins are pale, white on the cubital vein and straw elsewhere, with lines of dark and light in each interspace. A black spot is present at the posterior cell at the distal cubital vein. The postmedial line is marked by weak gray spots, strongest on veins M2 and CuA1. The terminal line is a series of tiny black dots between the veins. The fringe is similar to the ground color. All other lines and spots are absent. The hindwing is nearly pure white, including the fringe, with faint gray spots marking the terminal line on the mid-wing in some specimens. The head and thorax are the same color as the wing, with faint gray transverse barring on the collar. The eye is covered with fine hairs. The male antenna is filiform.

This species can usually be recognized by its streaky straw color that is darker near the cubital vein, faint spots on the postmedial line, and nearly immaculate, white hindwing. It is similar to Leucania multilinea, a species that flies in wet grasslands (although usually not in steppe habitats). It has a thin dark line along the base of the trailing margin and dark spots on the terminal hindwing that L. anteroclara lacks. When viewed side-by-side, it is less red than L. anteroclara with darker streaks on the forewing. Pale specimens of Leucania farcta occur with L. anteroclara and can be difficult to tell from it. In contrast, L. farcta is less dark along the forewing veins and has a cream hindwing, not white as in L. anteroclara. Acronicta insularis, a member of the subfamily Acronictinae, has streaked wings and flies in desert wetlands.  It is grayer than L. anteroclara, has a shorter basal dash that does not extend along as far lateral as the dark streak along the cubital vein, and lacks dark dots at the end of the cell. It lacks fine hairs on its eyes, amongst other structural differences.

Robert Poole (nearctica.com) shows a slightly different-appearing moth as A. anteroclara. It has less contrasting streaks along the forewing and a darker hindwing. Forms similar to these are found in the Wasatch Range in southeastern Idaho. It is possible that what we have called L. anteroclara on this site are desert populations of L. multilinea or an unrecognized species.  The genus Leucania is in need of further study in the Northwest.

This species is widely distributed at low elevations east of the Cascades in wet grasslands, riparian zones along creeks and rivers, and in disturbed agricultural and urban areas.

Leucania anteroclara is a species of the interior basins. It is found in the Columbia Basin in Washington, southeastern Oregon, and southern Idaho.

According to Poole (nearctica.com) L. anteroclara is a species of the Rocky Mountain region where it occurs from Alberta to New Mexico. It has also been recorded from Nebraska, southern Nevada, and southeastern California.

No information is presently available regarding larval foodplants of this species, but it is probably a climbing cutworm feeding on coarse grasses (Poaceae) like closely related species.

This species flies during late summer and fall in the Northwest. Adults have been collected from late July to late September but are most common in August. It is a nocturnal species that comes to lights.