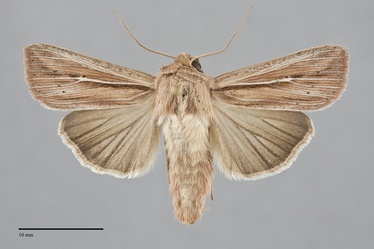 Leucania commoides is a stout-bodied, medium-sized moth (FW length 15 - 18 mm) that flies west of the Cascades and north of the Columbia Basin during the summer. It has dark gray hindwings and striate, slightly reddish, gray-tan forewings, powdery black streaks alongside and distal to a white cubital vein. The ground color of the forewings is gray-tan, lightest on the costa, in the fold, and as a short oblique streak to the apex. The outer and trailing margins are is slightly darker gray. The cubital vein is cream, extending to the outer margin on the branches M3 and CuA1. The other veins are slightly darker pale gray. Two pale streaks between each set of veins produce a finely streaked appearance to the wing that is greatest on the distal portion. Powdery black-gray is present along the white cubital vein, most extensively along the posterior side but also anteriorly in the distal cell. Thinner dark streaks are present at the base of the trailing margin below vein 1A+2A, near the anal angle anterior to this vein, and between several veins on the distal wing opposite the cell. A black dot is located at the posterior end of the cell at the distal cubital vein. The postmedial line is a series of gray dots, usually darkest in the fold and gradually fading anteriorly. A series of tiny black dots forms the terminal line. The fringe is gray-brown with pale streaks across it at the ends of the veins. The hindwing is dark brown-gray with darker gray veins and thin terminal line. The hindwing fringe is light gray with a tan base and thin gray median line. The head and thorax are gray-tan, with gray transverse barring on the collar and edges of the tegulae. The eye is covered with fine hairs. The male antenna is weakly bead-like.

Leucania commoides can usually be distinguished from other Leucania species by their large size, black forewing streaks, and dark hindwings. They most closely resemble a large Leucania dia or Leucania insueta. Leucania insueta, restricted to eastern British Columbia in our region, has a light hindwing base with a contrasting darker marginal band. Leucania dia is smaller than L. commoides, much grayer in color, and has a more conspicuous postmedial line comprised of similar size short black lines on the veins. Leucania commoides is easily distinguished from Leucania multilinea, which also has lighter forewing with similar dark streaks, by its white hindwing.

Leucania commoides is geographically variable in the Pacific Northwest. The specimens from west of the Cascades are distinctly reddish, unlike those from further east which resemble specimens from eastern North America.

This species is widely distributed in moist grasslands throughout much of North America.  In the Pacific Northwest, it is common in moist grasslands at low elevations west of the Cascades, including native prairies, oak savanna, and disturbed agricultural or urban grasslands.  East of the Cascades, it is mostly restricted to wetlands around marshes, irrigated pastures, and the riparian zones along creeks and rivers at low elevations.

The range of this species extends to the Atlantic from the Northwest. It occurs from central Alberta to Colorado in the Rocky Mountain region. The eastern distribution extends from southern Canada to Tennessee.

This species is a climbing cutworm that feeds on the seedheads of coarse grasses (Poaceae) such as orchard grass (Dactylis glomerata) and rye grasses (Elymus spp.).

The flight period of L. commoides is summer. Records from our region span late June to mid-September, with most specimens from July. It is nocturnal and comes to lights.