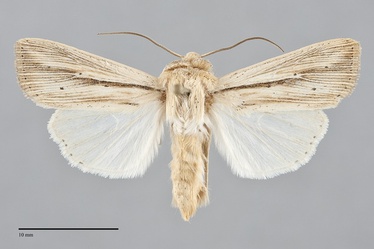 Leucania multilinea is a straw-colored, medium-sized moth (FW length 15 - 17 mm) that occurs sporadically in salt-marshes and wet meadows and flies in mid-summer. Its forewing has dark gray streaks below the white cubital vein, at the base of the trailing margin, and from the cell to the outer margin. The forewing is palest in the cell, from the end of the cell to the apex, and on the lower half near a dark streak below the cubital vein. Each interspace between the veins on the anterior and distal area of the forewing contain two parallel, pale lines, producing a finely streaked appearance. Dark gray-brown streaks are present along the entire length the of the posterior cubital vein, and less prominently near the trailing margin and distal to the cell. A small black dot is present at the posterior end of the cell adjacent to the distal cubital vein. Similar black spots represent the postmedial line on veins M2 and CuA1, often with additional smaller dots on other veins along this line. A series of tiny black dots forms the terminal line. The fringe is light tan with light transverse lines at the ends of the veins. The hindwing is slightly grayish-white, minimally darker at the outer margin and on the veins, with black dots at the terminal line on the mid-wing. The hindwing fringe is white. The head and thorax match the straw color of the forewing with faint transverse barring. The eye is covered with hairs. The antenna is bead-like.

This species can usually be recognized by its pale appearance with dark lines below the cubital vein and at the base of the forewing in combination with a white hindwing. A short, dark line on at the trailing margin on the basal third of the wing is unique to this species. The most similar species is Leucania anteroclara, which flies in steppe habitats slightly later in the season than L. multilinea. It lacks the black streak near the base of the trailing margin. When viewed side-by-side, it appears slightly more reddish with less contrasting streaks and paler dots on the postmedial line. The hindwing of L. anteroclara lacks black dots on the terminal line.

This species is widely distributed in wet grasslands and marshes throughout much of North America.  In the Pacific Northwest, it is sporadic with widely disjunct populations. It is most widespread in salt marshes in northwestern Washington and southwestern British Columbia. It occurs in wet meadows and marshes east of the Cascades.

This species is found most commonly in southern British Columbia and adjacent northern Washington, from the Gulf of Georgia across the width of the Province. Only a single population is known in Oregon at the Klamath Marsh National Wildlife Refuge along the east slope of the Cascades at relatively high elevations. A large population exists in this marsh.

Leucania multilinea has a relatively narrow north-south distribution near the Canada-United States border from the Northwest to the Northeast. The range along the Atlantic Coast is Pennsylvania to Nova Scotia.

This species is a climbing cutworm that feeds on the seedheads of coarse grasses (Poaceae) such as orchard grass (Dactylis glomerata) and brome grasses (Bromus spp.).

The flight season of L. multilinea is the summer, with records from mid-June to early August in our region. It is nocturnal and comes to lights.