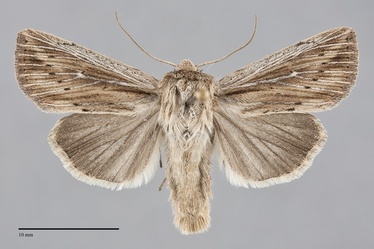 Leucania dia is a common, widespread, small to medium-sized (FW length 13 - 17 mm) streaky gray-brown and tan moth that flies in a variety of habitats throughout most of our area during the spring and summer. It has a gray hindwing and a gray-brown forewing with pale veins, a postmedial line of short black lines on the veins arranged in a smooth arc. Somewhat patchy gray-tan is present across the posterior wing below the cubital vein and as an oblique streak to the apex. A thin, black, basal dash is present posterior to the cubital vein. The cubital vein is white and the rest of the veins are mostly pale gray resulting in a pale streaked costa and pale lines on the distal wing. A brown line is present in each interspace on the distal wing producing a finely streaked appearance. The postmedial line is a series of short black lines on the veins, smoothly curved toward the outer margin. The terminal line is comprised of smaller black dots. The fringe is gray-brown traversed by light lines at the ends of the veins. The hindwing is medium-dark gray with darker gray margin and veins. The hindwing fringe is white with a light tan base. The head and thorax are gray-tan with faint gray transverse barring on the collar. The eye is covered in fine hairs. The male antenna is bead-like.

This the smallest and grayest Leucania species in the Northwest and is generally recognizable based on these features. Leucania insueta, a species that is restricted to eastern British Columbia in the Northwest, is closely similar in pattern to L. dia but is redder on the forewing and lighter in color on both wings. The base of its hindwing is pale gray with a darker band at the margin. Photedes defecta, an uncommon moth that flies in wetlands, bears some resemblance to L. dia because of its similar size and streaked yellow-brown forewing pattern. It lacks the pale cubital vein and dotted black postmedial line of L. dia, and lacks fine hairs on its eyes like other members of the tribe Apameini.

This species was until recently confused with Leucania insueta, including in the Northwest. Schmidt and Anweiler (2010) recognized that L. dia, a predominantly western species, and L. insueta, mostly eastern, are distinct with a zone of overlap in Alberta. The data points from the zone of potential overlap toward the eastern edge of the Northwest might not be entirely correct because some of the material on which the data was derived was sorted prior to the recognition that L. insueta and L. dia were both found in our area (L. Crabo July, 2012)

The type locality of the synonym Leucania megadia Smith is Oregon.

Leucania dia is widespread in forests and open grasslands throughout most of our region. It is absent from low-elevation steppe, although it occurs in isolated mountains in the Basin and Range Ecoregions.

The global range of L. dia is not well known due to confusion with L. insueta. It occurs widely in the West, including in Alberta, the Rocky Mountains, and California.

The larva is a foodplant specialist feeding on grasses (Poaceae).

Leucania dia is single-brooded with a single flight in early summer. The Northwest records extend from early May to early August but are most numerous in June. This species is nocturnal and comes readily to light.