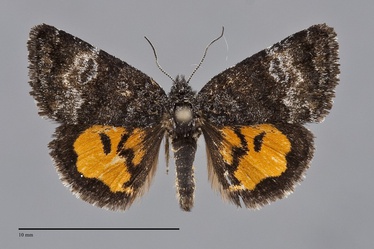 Annaphila decia is a very small (FW length 9 - 10 mm) day-flying noctuid moth with a dark gray forewing and bright orange hindwing with black markings, including a sinuous antemedial line. The forewing is triangular. It is brownish black medial to the reniform spot and slightly lighter brown-gray distally. The antemedial and median lines are similar, straight, thick, and black. The postmedial line is indistinct hoary gray. It is is bilobed toward the outer margin near the reniform spot and nearly straight to the trailing margin caudal to the spot. The subterminal line is pale and thin, preceded by a black shade on the anterior two-thirds of the wing. A black terminal line is present at the base of the brown-black fringe. The orbicular spot is very inconspicuous, small, round, thinly outlined in black, and filled with a few pale gray scales. The reniform spot is kidney-shaped, similar in color to the adjacent pale postmedial line, and filled with dark gray. A claviform spot is absent. The hindwing ground color is bright orange, suffused with gray at the base and inner margin. A black irregular antemedial line is present. The discal spot is moderately large and triangular in shape. A sharply defined marginal band is present with an undulating inner margin. The fringe is dark gray with a slightly lighter edge. The head and thorax are hoary dark gray with numerous hair-like scales. The eyes are reduced in size. The male antenna is filiform, each segment ringed with black and white.

This species resembles the other Annaphila species with orange hindwings. It can be distinguished easily from Annaphila mera and Annaphila danistica because both of these species hae a black orbicular spot on the ventral forewing. The antemedial lines on the dorsal hindwings of Annaphila depicta and Annaphila macfarlandi are straight, not sinuous as in A. decia. Both of these species has a tooth-like projection along the medial margin of the dorsal hindwing marginal band that A. decia lacks. The reniform spot of A. macfarlandi is indistinct, and the anterior postmedial band is broad and whitish, unlike those of A. decia. The forewing color of A. depicta is lighter blue-gray than that of A. depicta.

This species is widely distributed in many habitats throughout the Pacific Northwest, including dry canyonlands and sagebrush steppe east of the Cascades and moist grasslands and open riparian forest habitats along creeks at low elevations west of the Cascades.

Annaphila decia is found in eastern Washington and northern Idaho, most commonly along the margins of the Columbia Basin. It also occurs west of the Cascades on the southern tip of Vancouver Island and in western Oregon.

This species occurs widely in California as far south as the Transverse Ranges near Los Angeles.

Adults are diurnal and visit flowers during the day. They fly during the spring, slightly later in the year than A. danistica and Annaphila arvalis. Records from our region are from early April to late June, with most records from April and May.