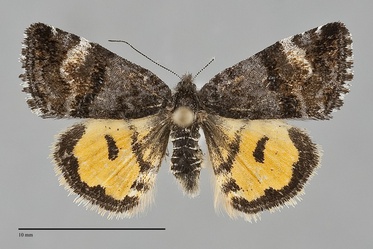 Annaphila macfarlandi is a small (FW length 11 mm) day-flying moth that flies in western Oregon and southern Washington in early spring. It has a forewing that is gray basally and dark brown, black, and white distally, and an orange and black hindwing.  The forewing is stubby with a triangular shape. The basal half is blue gray with barely evident black basal and antemedial lines. The color is due to dark scales with light edges. The distal wing is dark brown with mottled blue gray in the subterminal and terminal areas. The antemedial line is sinuous. The median line is black, diffuse, and straight across the wing, separating the gray base from the brown distal portion. The antemedial line is pale, broad and white at the costa, white suffused with brown on the mid-wing, and narrower and light gray toward the trailing margin. The subterminal line is sinuous and white on the costa but dark elsewhere. A thin, dark gray terminal line is present at the base of the checkered fringe. None of the spots are identifiable. The hindwing ground color is light orange, with dark gray suffusion at the base and along the inner margin. A straight black antemedial line is present, and the location of the postmedial line is evident as a black spot on the inner margin. A bar-like black discal spot is present. The thin marginal band is sharply defined medially and has an undulating margin, projected most strongly toward the base in the fold. The hindwing fringe is black basally and orange distally. The head and thorax are hoary dark gray with many hair-like scales. The eye is reduced in size. The male antenna is filiform with black and white-ringed segments.

This species resembles our other orange-hindwing Annaphila species, especially Annaphila depicta. It is most readily identified by its dark brown distal forewing with a whitish postmedial line and absence of normal spots. Specimens from the east slope of the Cascade Mountains in southern Oregon appear to be transitional between A. macfarlandi and California A. depicta.

This species is sporadically distributed in moist riparian zones along creeks at low to middle elevations both west and east of the Cascades in Oregon, but may be locally common.

This species is found in western Oregon and on the east slope of the Cascades in Oregon and in the Columbia Gorge in Washington.

This species is a Pacific Northwest endemic.

No information is presently available regarding larval foodplants of this species, but closely related species feed on Phacelia spp. in the Hydrophyllaceae.

Adults are diurnal and visit flowers during the day. They fly in early spring and have been collected in March and April.