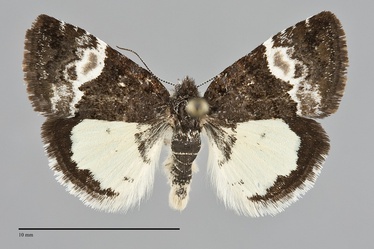 Annaphila diva is a small (FW length 10 - 11 mm) day-flying moth that flies in the spring. It has a black forewing with a large white reniform spot and pale yellow and black hindwing. Both wings are relatively short and broad. The forewing is dark brownish black with a brassy luster on the medial half and dark gray on the distal portion. Pale gray scales are variably present in the subterminal area, strongest and most consistently present on the posterior portion. The basal, antemedial, and median lines are dark gray to black, usually indistinct due to the dark color of the adjacent wing. The postmedial line is gray to black, double, and filled with pure white anterior and posterior to the reniform spot and light gray lateral to the spot. It is partially fused to the spot and it is difficult to elucidate which components are derived from the line and which are part of the spot. The subterminal line is pale and thin, evident on the costa and near the anal angle. It is followed by a black shade at the apex and opposite the cell. The terminal line is a series of dark spot between the veins. The fringe is weakly checkered with light gray. The orbicular spot is absent of a small black circle filled with the adjacent dark ground. The reniform spot is large and white, partially fused to the postmedial line, and filled centrally with gray. The claviform spot is absent. The hindwing ground color is immaculate pale yellow, suffused with gray basal to the antemdial line. A sharply marginated black marginal band is present. The discal spot is a gray dot. A similar dot near the inner margin likely represents a remnant of the postmedial line. The fringe is black anteriorly, two-toned with black basal and white distal components at mid-wing, and white at the anal angle. The head and thorax are hoary dark gray. The eyes are reduced in size. The male antenna is simple with black and white ringed segments.

This is one of two Annaphila species with whitish hindwings. Annaphila casta, limited to western Oregon in the Northwest, has pure white hindwings. The white markings on its forewing are more extensive than in A. diva.

This species is common and widely distributed in moist riparian habitats along creeks at low to high elevations in the Coast Range and along the west slope of the Cascades.  It occurs in similar habitats in the Blue Mountains.

Annaphila diva is found in the western part of the Pacific Northwest as far north as southwestern British Columbia. It also occurs in northern Idaho, southeastern Washington, and northeastern Oregon.

The range of A. diva extends to southern California west of the crest of the Sierra Nevada.

This species is a foodplant specialist feeding on miner's lettuce (Montia perfoliata) in the Portulacaceae.

Adults are diurnal and visit flowers during the day. They fly in the spring and are most commonly collected during April and May. Later dates are likely from higher elevations.