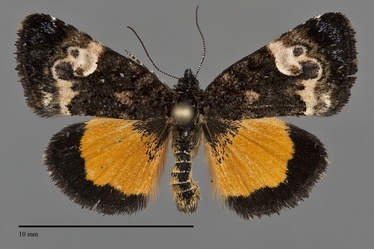 Annaphila miona is a very small (FW length 9 mm) day-flying moth that flies on the west slope of the Oregon Cascade mountains during late spring. It has a nearly black forewing traversed by a mottled off-white band that encompasses the reniform spot, and a bright yellow-orange hindwing with a black marginal band. The forewing is fairly broad. It is dark blackish brown, black distal to the postmedial line. The basal, antemedial, and medial lines are black, diffuse, and barely visible. The distal medial area, reniform spot, and postmedial line form a complex pattern similar to those in several other members of the genus Annaphila. The effect is of an brownish off-white band containing several dark spots across the distal third of the wing. The reniform spot is white with tan filling and has a dark gray dot in the lower portion. Two larger dark gray spots are present distal to the upper and lower reniform spot, the posterior larger than the anterior, each bordered by a black arcs formed by the inner component of the postmedial line. The line is double, evident as these two arcs and the brown filling. The subterminal line is diffuse, a broad band of bluish scales across most of the wing and a white spot near the anal angle. A few brown scales form the terminal line on the posterior half of the wing. The fringe is black. The orbicular spot is absent. The claviform spot is black, but is evident mainly due to its brown filling. The hindwing is bright yellow orange with a sharply defined pure black marginal band and a dusting of black scales at its base that produce an line near the inner margin in some specimens. The hindwing fringe is black with a few pale scales along the outer margin opposite the cell. The head and thorax are hoary charcoal gray with a thick covering of long hair-like scales. The eyes are reduced in size. The male antenna is filiform, black with white rings on each segment on the proximal two-thirds.

This species can usually be recognized by its small size and vivid pattern with orange and black hindwings. It is most similar to Annaphila lithosina in the Pacific Northwest. The base of the hindwing of A. miona lacks a thin black line near the anterior margin and its forewing reniform spot contains darker filling. The hindwing of A. lithosina has a dark line across its entire portion, reaching the anterior margin, and the forewing reniform spot is nearly white.

This species flies in rock gardens along the west slope of the Cascades in Oregon.

Annaphila miona has been found at one location in the Pacific Northwest where it was discovered by Mike Raschko. It is in Linn County, Oregon along the western slope of the Cascades.

This species is a foodplant specialist feeding on muskflower (Erythranthe moschatus) in the Phrymaceae. This has been confirmed as the food plant in Oregon (M. Raschko pers. comm. 2016).

Adults are diurnal. They fly in the spring and early summer. The capture dates from our region are from late May until mid-June.