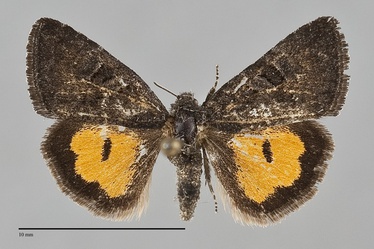 Annaphila mera is a very small (FW length 10 mm) day-flying moth with a dull dark brown-gray forewing and an orange hindwing with the dorsal markings limited to black discal spot and marginal band. The forewing wing is stubby and triangular. The color is even dull dark brown-gray with indistinct lines and spots. The basal, antemedial, and medial lines are barely visible. The smooth dark postmedial line is indistinct in some specimens but is usually evident, darkest near the trailing margin. It curves smoothly around the reniform spot and is slightly oblique toward the anal angle near the trailing margin. A thin dark terminal line is present at the base of the dark gray-brown fringe. The orbicular and reniform spots are similar, large, oblique to the wing axis, with black and pale medial and lateral outlines but open anteriorly and posteriorly. The spots and the cell between them are jet black on the ventral side. No claviform spot is present. The hindwing ground color is bright orange, suffused with gray at the base and inner margin. A black bar-like discal spot is present, and there is a sharply demarcated thin black marginal band with an undulating inner contour. The fringe is gray-brown, darkest at the base. There are no dorsal antemedial or postmedial lines. The head and body are hoary dark gray with many long hair-like scales. The eye is reduced in size. The male antenna is filiform.

Annaphila mera resembles the other Annaphila species with orange hindwings. It is the only species that has a discal spot but no antemedial or postmedial line on the dorsal hindwing. It and Annaphila danistica share the distinctive pattern of black spots on the ventral forewing.

This species appears to be very rare and sporadically distributed in moist riparian habitats along creeks at low elevations west of the Cascades in Oregon.

The Northwest range of A. mera is limited to western Oregon.

This species occurs in California where it has been found along the coast, in the Sierra Nevada, and in the southern part of the state.

No information is presently available regarding larval foodplants of this species, but closely related species feed on Phacelia spp. in the Hydrophyllaceae.

Adults are diurnal and visit flowers during the day. They fly during the spring and have been collected in late April in Oregon.