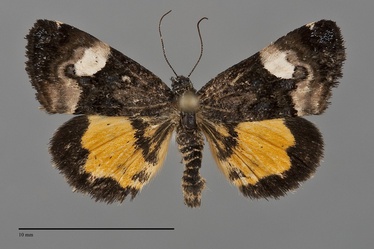 Annaphila lithosina is a small day-flying moth (FW length 11–12 mm) that flies in southwestern Oregon during the spring. It has a large, pure white reniform spot on a dark background and a bright orange hindwing with black basal markings and a marginal band. The forewing is mottled brown, lightest brown in the medial and posterior subterminal area. The median area medial to the median line and the terminal area are filled with dark metallic scales with blue reflectance. The basal and antemedial lines are black, double with light brown filling. The inner and outer components of the antemedial line are widely separate, and the line is smoothly sinuous, with a long tooth toward the outer margin on the mid-wing. The median line is thick and black. The postmedial line is pale on the anterior wing where it forms two bulges toward the outer margin lateral to the reniform spot, and uneven thickness black below the spot where it is perpendicular to the posterior margin. The subterminal line is a small white mark on the costa and only evident elsewhere due to preceding black in the subterminal area. The fringe is checkered brown and black. The reniform spot is large and completely filled with even cream. The other spots are absent. The hindwing is bright orange, with black markings consisting of a moderately thin and irregular antemedial line, a small spot on the inner margin as the only remnant of the postmedial line, and a marginal band with a well-defined sinuous inner border. The hindwing fringe is irregularly checkered black and white. The head and thorax are powdery dark brown. The eye is reduced in size. The antenna is black with white-ringed segments at the base, filiform in both sexes.

This species can be identified readily by the combination of dark forewing with a large cream reniform spot and orange hindwing with black markings. No other Annaphila in our region has the same pale reniform spot.

This species flies along streams in mixed forests. It is most common in canyons in California (Powell & Opler 2009), but also occurs on open rocky slopes with wet seeps at middle elevations in the Oregon Cascades.

Annaphila lithosina is distributed along the west slope of the Oregon Cascades  in the Pacific Northwest.

This species occurs in northern and western California outside of the Northwest. It is predominantly found west of the Sierra Nevada but also flies in the northern part of this range.

The adults are on the wing during spring and early summer. The Oregon specimens were found during mid-May. This species is strictly diurnal with adults nectaring on such flowers as blue gilia (Gilia capitata) and snowbrush (Ceanothus spp.).