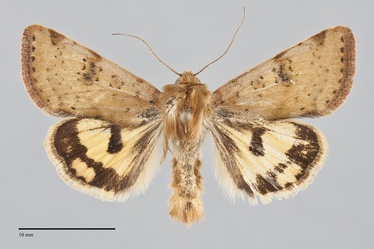 Heliothis acesias is a medium-sized moth (FW length 15 - 16 mm) that flies in eastern Oregon and southern Idaho during the summer. It has an even, orange-brown forewing with spots forming dotted outlines and a light orange hindwing with a large black discal spot and interrupted marginal band. The forewing color is bright burnt orange, slightly darker along the trailing margin, with a gray triangle on the costa medial to the subterminal line. The lines are faint gray, barely traceable except on the costa. The median line is usually evident on the posterior wing. The postmedial line is strongly zig-zagged, often evident as a series of small dark dots on the tips of the teeth. The faint, pale, and even subterminal line is preceded by a dark shade that forms ill-defined dark dots between veins in some individuals. A row of dark well-defined dark gray to black spots forms the terminal line. The fringe is brown-gray, slightly darker than the rest of the wing. The orbicular and reniform spots are rimmed by black dots. The round orbicular spot is filled with the orange ground and a central dark ocellus. The ovoid to weakly hourglass-shaped reniform spot is filled with the ground peripherally and dark gray centrally. The clavifom spot is absent or a dark smudge. The hindwing is light orange, suffused with dark gray at the base and medial margin. The discal spot is large and black. The black marginal band has a large oval patch of the ground color centered on vein CuA1, often with additional smaller orange spots elsewhere. The hindwing fringe is light orange with a dark gray base at mid-wing. The undersurfaces of both wings are light orange with black spots and subterminal lines. The head and thorax are slightly darker orange than the forewing. The male antenna is filiform.

This species can be identified by its burnt orange forewing with pattern of dotted lines and spots and orange hindwing with black large discal spot and interrupted marginal band. It is most similar to Heliothis phloxiphaga and was for a long time considered to be a color form of this species.

This species is endemic to dry grasslands or sagebrush steppe at low elevations in the Great Basin region.  Little information is presently available regarding specific habitat preferences in our region.

Heliothis acesias is known from far eastern Oregon and the Snake River Plain in southern Idaho.

The range of this species extends east across the northern Great Plains. Midwestern and eastern populations are found in the Great Lakes Region and along the St. Lawrence River, respectively. It has also been found in northeastern Nevada.

No information is presently available regarding larval foodplants of this species, but it probably feeds on various herbaceous plants based upon closely related species.

Heliothis acesias has been found during the summer in the Northwest, with records in July and August. It comes to lights but also flies during the day. A specimen was collected at Phlox (Caryophyllaceae) in southwestern Minnesota.