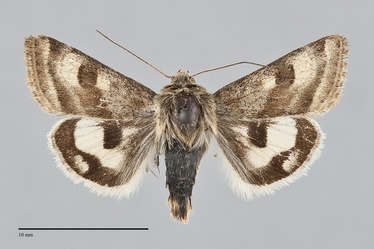 Heliothis ononis is a small moth (FW length 11 - 12 mm) that flies in eastern British Columbia during the summer. It has a banded light grayish-yellow and olive-gray forewing with a large dark reniform spot and a cream and black hindwing with a large discal spot and interrupted marginal band. The palest areas of the forewing are the cell, the median area lateral to the reniform spot, and the smooth straight subterminal line. The rest of the wing is light gray or dark olive-gray, darkest at the base, posterolateral median area, and subterminal area. The antemedial line is limited to a dark mark on the costa. The median line is dark and wide, is sharply demarcated medially, undulates across the wing, and passes through the reniform spot. The postmedial line is gray, double filled with the pale ground, smoothly excurved. The fringe is similar to the terminal area with a slight rosy tint. The orbicular spot is round, filled with the gray of the surrounding wing. The reniform is large, broadly oval, filled with dark gray to black. No claviform spot is evident. The hindwing is pale whitish cream suffused with gray at the base and on the anterior and inner margins. The discal spot is black, broadly oval or rectangular. The marginal band is dark gray to black, interrupted by patches of the pale ground color near the margin between veins M3, CuA1, and CuA2. The hindwing fringe is white with a gray base. The head and thorax are dark olive gray. The eye size is reduced. The male antenna is filiform.

This species is similar to Heliothis oregonica, although it is slightly larger. It has a darker wing base with a warm nutmeg color that H. ononis lacks. H. oregonica also has a gray subterminal area that is less smoothly defined by the adjacent postmedial and subterminal lines than in H. ononis. The orbicular spot of H. oregonica is similar in darkness to the reniform spot, rather than lighter gray.

No information is presently available regarding habitat preferences of this species in the Pacific Northwest.

Heliothis ononis has been found in the Rocky Mountain Trench of eastern British Columbia.

This species flies in the northern Great Plains region from Colorado through the Canadian Prairie Provinces to Northwest Territories. Most of the records appear to be from Alberta, Saskatchewan, and Montana.

The foodplant of H. ononis is flax (Linum spp. (Linaceae)), including commercial flax (Linum usitatissimum). The larvae feed on the bolls of the plant.

Heliothis ononis is diurnal and visits flowers for nectar. The flight period across the range of the species is May to August (Harwick 1996).

This species is a pest of flax in the Great Plains.