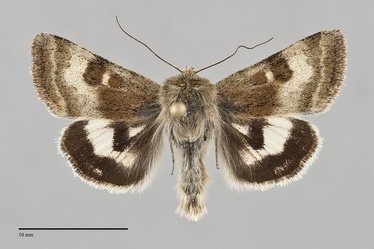 Heliothis oregonica is a small day-flying moth (FW length 13 - 15 mm) that occurs in the dry interior of the Northwest and flies during late spring and summer. It has a dusty olive-gray forewing suffused with a dark nutmeg color on the base and in the large spots and a white and black hindwing with a large discal spot and incomplete marginal band. The ground color is pale olive-gray with a slight yellow tint, darker in the subterminal and terminal areas. The basal half of the wing is variable in darkness with an unusual warm brown due to a mixture of black and light reddish scales. This same color fills the large orbicular, reniform, and claviform spots, producing a "ghost-eye" appearance of dark holes in the wing. The postmedial line is absent or a chain of gray spots. The subterminal line is pale, nearly straight. The fringe is the color of the terminal area. The hindwing is white with black suffusion at the base, on the veins, and along the inner margin. The discal spot is very large, square or halfmoon-shaped. The black marginal band contains two white spots near the margin between veins M3, CuA1, and CuA2. The hindwing fringe is tricolored with yellow base, gray median line, and white tip; entirely white at the anal angle. The head and thorax are olive gray. The eye is reduced in size. The male antenna is filiform.

This species is unlikely to be confused with other species in most of its range. The similar species Heliothis ononis flies in eastern British Columbia. It is slightly smaller than H. oregonica, with a lighter medial wing lacking warm brown scales. H. ononis also has an orbicular spot that is lighter gray than the dark reniform spot, rather than equally dark as in H. oregonica, and it has a more smoothly contoured gray subterminal area that is bordered medially by a smooth, double postmedial line and laterally by a smooth, wide subterminal line.

This species is widely distributed in open mountain meadows at middle to high elevations throughout the Rocky Mountains and Cascades.  It is usually uncommon to rare.

Heliothis oregonica is widely distributed in the southern third of British Columbia. It is also found in the Idaho Panhandle, and throughout most of the eastern parts of Washington and Oregon

This species has a wide distribution in western North America outside of the Northwest. It occurs throughout the southern half of Alberta south through the Rocky Mountains to northeastern Arizona. It is also found in northeastern California. A disjunct eastern population is found in northern Quebec.

This species feeds on herbaceous vegetation with a strong preference for paintbrush (Castilleja spp.) in the Scrophulariaceae as larval foodplants.

Adults are strictly diurnal and visit flowers during the day. They fly in the spring and early summer, later at high altitudes. Records from the Northwest span April to August.