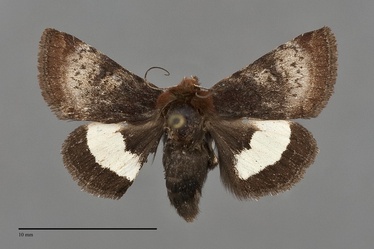 Heliothis borealis is a small (FW length 10 - 11 mm) attractive black, maroon, and white day-flying moth that has been found in southeastern British Columbia and western Montana in our region. The forewing is light gray with a heavy suffusion of charcoal gray to black on the basal half that usually spares the cell between the spots. A diffuse triangular black spot is present on the costa medial to the subterminal line. The terminal area is maroon, with darker gray outer margin and fringe. The basal and antemedial lines are obscured by the dark background, sometimes evident as pale sinuous lines. The postmedial line is single, gray, and scalloped between veins. The subterminal line is even, pale gray. The orbicular and reniform spot outlines are dark gray, filled with the light gray ground peripherally and dark gray centrally. The hindwing is pure white with solid dark gray suffusion from the base to the black discal spot and an even black marginal band and fringe. The head and thorax are maroon, with a white base (scape) of the antennae. The eye is reduced in size. The male antenna is filiform.

This is the smallest species of Heliothis in North America. No other moth in our region has a similar gray and maroon forewing and white and black hindwing.

The habitat is unknown in the Pacific Northwest.

This species has been collected in southeastern British Columbia and in western Montana in the Northwest.

The North American range of H. borealis extends east from our region across southern Canada. It occurs from Alberta to the border between Quebec and Labrador. The range dips south in the northern Midwest, including parts of Minnesota, Wisconsin, and Michigan's Upper Peninsula.

The larvae were reared by Hardwick from eggs. The female laid eggs selectively on chickweed (Cerastium arvense (Caryophyllaceae)) and the larvae were successfully reared to maturity on this plant. Older larvae also ate Phlox (Polemoniaceae) and Ledum (Ericaceae).

This species is strictly diurnal. The flight season is May and June. The Montana specimen was collected in early May.