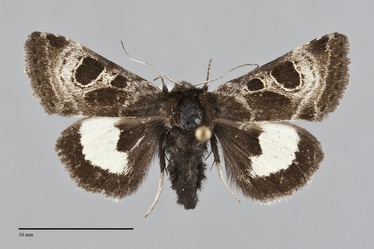 Heliothis belladonna is a distinctive, small (FW length 12 - 14 mm) gray, black, and white moth that flies in the day in eastern Washington during the spring. It has very large ,white-rimmed, and black-filled forewing spots. The forewing is powdery light to medium-dark gray, with darker gray basal area, costa, trailing margin, and terminal area. The subterminal area is variable, usually dark gray at the costa and trailing margin with the ground color at mid-wing, but occasionally entirely dark. The antemedial line is gray, smoothly excurved from the base of the costa to the inner third of the trailing margin. The postmedial line is double with black inner and gray outer components, smoothly convex around the reniform spot nearly touching the subterminal line, then oblique toward the base to the inner margin. The pale gray subterminal line is straight across the wing. The three spots are large, especially the claviform and ovoid reniform spots. All three spots have thin black outer and white inner outlines and are filled with black. The fringe is dark gray. The hindwing ground color is white. The entire base and inner margin are black and are fused to the discal spot. The marginal band is even, fused to the inner margin at the anal angle. The head and body are black. The eye is reduced in size. The male antenna is filiform.

No other moth has similar large forewing spots and a black and white hindwing. This species cannot be confused with any other species in our area.

This species is widely distributed on dry, open sagebrush steppe at low to high elevations throughout the Great Basin region.  It is found as high as 11000 ft in the Sierra Nevada. It is usually uncommon or rare.

Heliothis belladonna is found in the Columbia Basin in Washington and the Snake River Plain in southern Idaho.

The range of this species extends from central Wyoming, Utah, and Arizona to southern and eastern California south of our region.

No information is presently available regarding larval foodplants of this species, but it probably feeds on herbaceous plants based upon closely related species.

Adults are diurnal and visit flowers during the day. It takes nectar at desert parsley (Lomatium spp., Apiaceae) in Kittitas County, Washington. The flight season is in the spring, with records from March through May in our region.