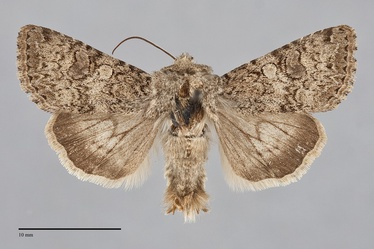 Anarta alta is a mottled dull gray-brown medium-sized moth (FW length 14 - 15 mm) with a dark reniform spot and a banded light brown hindwing that flies in Rocky Mountain forests during late spring and summer. The forewing is slightly darker gray in the terminal area, sparing the apex. The basal, antemedial, and postmedial lines are crisp dark gray, double with filling of the ground. The basal and antemedial lines are moderately irregular. The antemedial line is scalloped on the veins and slightly excurved. The median line is dark gray, scalloped and closely parallel to the postmedial line below the reniform spot. The postmedial line is moderately scalloped, often with light or dark spots on the veins near the tips of the teeth, drawn toward the base on the costa, gently and broadly excurved around the reniform spot, touching the lower spot, and angled toward the base below the spot. The subterminal line is pale brown, offset toward the base below the costa, forming a strong W-mark on M3 and CuA1, and slightly concave toward the base between these marks. A dark gray spot precedes the line at the costa and a series of subterminal area wedges abut it near the W-mark. The terminal line is a series of dark gray triangles between veins. The fringe is light brown, weakly checkered with gray. The orbicular and reniform spots are outlined in thin black. The orbicular spot is large and round, filled with the ground color or pale gray with a darker central ocellus. The reniform spot is large, broadly kidney-shaped, mostly filled with smoky purplish gray. The claviform spot is small, black, filled with the ground color or gray. The hindwing is pale tan with a moderately well-defined dark gray marginal band, faint scalloped postmedial line, discal bar, and veins. The hindwing fringe is whitish with a slightly darker base. The head and thorax match the forewing, with faint gray barring across the collar. The eye is covered with fine hairs. The male antenna is bead-like.

This species resembles many other brown or gray-brown Anarta species, especially Anarta oregonica, Anarta columbica, and Anarta inconcinna. Anarta alta should only be expected in the Rocky Mountains of eastern British Columbia. Anarta inconcinna occurs on prairies east of the Continental Divide. It is grayer with a yellow tint and has more contrasting dark markings than the other species, especially the lower reniform spot which is accentuated in black. Anarta alta tends to be slightly lighter brown than A. oregonica and has crisper forewing lines and spots. Males can be identified by the shape of the distal clasper of the left valve, long - reaching the cucullus - and rod-like. Those of the other species are thicker and shorter, ending proximal to the neck of the cucullus. These differences are easily observed under magnification after brushing the scales from the valves with a fine brush. Anarta columbica is found south of central British Columbia. It is usually grayer than A. alta and differs in the character of the male genitalia.

Anarta alta flies in high-elevation forests in the Rocky Mountains of Alberta (G. Anweiler personal communication 2012). It should be sought in similar habitats in eastern British Columbia.

This species appears to have a limited range near the Canadian portion of the Rocky Mountains.

Anarta alta flies during late spring and summer. It has been recorded from May to July throughout its range. It is nocturnal and comes to lights.