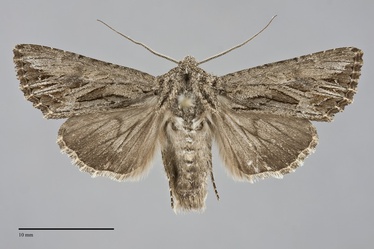 Anarta fusculenta is a dull, dark, olive-tan-gray, medium-sized moth (FW length 14 - 16 mm) that flies in open sage steppe during spring. It has a streaked black and blue-gray distal wing, a large black claviform spot with gray filling, and an elongate orbicular spot. The forewing has a slightly scalloped margin posteriorly. The color is fairly uniform dark olive brown-gray with dark gray near the posterior margin near the antemedial line, sometimes more extensively. Light blue-gray suffusion is present along other portions of the posterior margin in some specimens and more often in the subterminal area, especially below the apex and along the veins at the W-mark. The mid-subterminal area and entire terminal area are darker dull gray except near the apex. The distal veins are thin and dark. The basal, antemedial, and postmedial lines are variable in prominence, usually mostly absent except for gray spots on the costa. An oblique black line at the medial lower claviform spot might be a segment of the antemedial line, as might a longer black line along the base of the posterior margin. The median line is a faint gray spot on the costa. The postmedial line is often completely absent below the costa, a thin gray angled line below the reniform spot when visible. The subterminal line is pale whitish, evident except near the costa and posterior margin, forming a strong W-mark on M3 and CuA1 and fused with pale along these veins at the mark. It is preceded by long dark gray to black wedges near the W-mark, and a gray shade on the mid- and posterior wing. The terminal line is a series of dark gray to black lines, spots, or triangles between veins. The fringe is gray-tan to dark gray with light tan to ochre-brown transverse lines at the ends of the veins and a similar light basal row in some specimens. The orbicular and reniform spots are partially outlined in thin black. The orbicular spot is an elongate oval that often touches the reniform spot, filled with the ground color or lighter gray and a gray central line. The reniform spot is moderately large, broadly kidney-shaped with the lower half expanded to the postmedial line, usually poorly defined anteriorly, filled with the ground color and variable smoky purple gray in the posterior half. The claviform spot is large, usually reaching the postmedial line, apically pointed, thick and black filled with dark gray-brown. The hindwing is dirty gray-tan with an indistinct dark gray marginal band, a discal lunule, and veins. The hindwing fringe is light gray-tan with a darker base. The head and thorax match the forewing, with a black transverse line across and a pale tip to the collar, and dark edges on the tegulae. The eye is covered with fine hairs. The male antenna is bead-like.

This species can usually be identified from other early-season steppe moths by its olive-gray color, large dark claviform spot, and dark gray and blue-gray streaky pattern on the distal forewing. Having said that, it can be very difficult to distinguish it from Anarta crotchii, a species from which it was only recently distinguished by Mustelin (2006) in southern California. Anarta crotchii tends to be lighter tan in color rather than olive-gray like A. fusculenta, is more likely to have a round rather than elongate orbicular spot, has a smaller and more rounded claviform spot, and lacks dark shading along the posterior margin. Anarta fusculenta occurs in open sagebrush steppe away from trees while A. crotchii is usually found at the edge of the forest or in riparian areas. These two forms were collected on the same night at two locations with different habitats in Douglas County, Washington (Moses Coulee and Corbaley Canyon) with no overlap in phenotype. Both of these Anarta species resemble Apamea cinefacta in size and color but differ in many details of the pattern, including the a more normal kidney-shaped reniform spot in this species, and the presence of hairs on the eyes that species in the tribe Apameini lack. Euxoa edictalis flies with A. fusculenta and is a similar color. It has a toothed dark postmedial line and lacks the dark claviform spot of A. fusculenta. It also lacks hairy eyes.

This species is widely distributed in open dry habitats.  In the Pacific Northwest, it is common in juniper woodlands and sagebrush steppe at middle to low elevations east of the Cascades.  This moth was particularly abundant in juniper-sagebrush habitat of central Oregon that was burned off by a wild fire two years before and appears to favor such disturbed habitats.

Anarta fusculenta is restricted to the dry interior of the Northwest, including the Columbia Basin, southeastern Oregon, and southern Idaho.

The range of this species is poorly known due to confusion with Anarta crotchii. It occurs in southern California, and probably also occurs in eastern California and in the Intermountain West. A specimen from southern Alberta appears to be this species suggesting that it might also fly over the western Great Plains.

This species flies during the spring, usually in April and May. It is nocturnal and comes to lights.