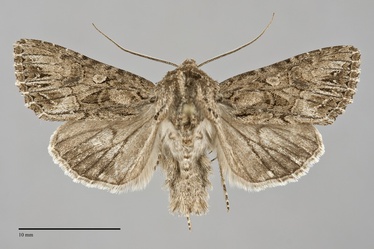 Anarta crotchii is a dull, gray-tan medium-sized moth (FW length 14 - 16 mm) that flies in dry forests and adjacent sage steppe during spring. It has a streaked distal wing, a small to medium-size black claviform spot, and an asymmetric reniform spot. The forewing has a slightly scalloped margin. The medium-dark gray tan color is fairly uniform, slightly darker gray along the costa and in mid-subterminal area. The terminal area is darker gray except at the apex. Light blue-gray suffusion is present in the subterminal are below the apex and along the veins at the subterminal W-mark in some specimens, contrasting with the thin dark veins on the distal wing. The basal, antemedial, and postmedial lines are gray, partially black along the basal and antemedial lines, double with ground color filling. The basal and antemedial lines are variable in prominence, sometimes absent except for spots on the costa, moderately irregular when visible. The median line is gray, faint on the costa and posterior margin and absent elsewhere. The postmedial line is a pair of spots on the costa and weak elsewhere, weakly scalloped, drawn toward the base on the costa, gently and broadly excurved around the reniform spot, touching the lower end of the spot, and angled toward the base below the spot. The subterminal line is pale brown to ochre-brown, faint or absent near the apex and incomplete elsewhere, forming a moderate W-mark on M3 and CuA1. It is preceded by dark gray to black wedges near the W-mark and a gray shade on the mid- and posterior wing. The terminal line is comprised of dark gray triangles between veins that produce a serrate look to the margin. The fringe is gray-tan to dark gray with light tan to ochre-brown transverse lines at the ends of the veins. The orbicular and reniform spots are partially outlined in thin black. The orbicular spot is round to oval, filled with the ground color or lighter gray with a gray central ocellus. The reniform spot is moderately large, broadly kidney-shaped with the lower half expanded to the postmedial line, filled with the ground color and variable smoky purple gray in the posterior half. The claviform spot is black, small to moderate and usually rounded apically, less often pointed, filled with the ground color or slightly darker gray-brown. The hindwing is dirty gray-tan with an indistinct dark gray marginal band, a discal lunule, variable postmedial line, and veins. The hindwing fringe is light tan to tan with a darker tan base. The head and thorax match the forewing, with several gray transverse bands on the collar and dark edges on the tegulae. The eye is covered with fine hairs. The male antenna is bead-like.

This species can usually be recognized by its gray-tan color, bulging lower reniform spot, and fairly small black claviform spot in combination with its early flight season. However, it is very close to Anarta fuscolenta, a species that has only recently been recognized as distinct from it (Mustelin 2006). The relationship of these taxa is poorly understood in our region. In general, A. crotchii is more tan in color, has a posterior margin that resembles the rest of the wing in color, and has a fairly small claviform spot while A. fuscolenta has an olive-tinted grayer color, dark gray suffusion along the posterior wing, and a long gray-filled claviform spot. Anarta crotchii is more common in forests while A. fuscolenta prefers open sage steppe with few or no trees. Both of these Anarta species are similar in size and color to Apamea cinefacta, a spring-flying species with which they occur at some sites. It lacks the bulge in the lower reniform spot, and also lacks hairs on the eye surface.

This species is widely distributed in dry ponderosa pine forests, juniper woodlands, and in open sagebrush steppe throughout much of western North America.  In the Pacific Northwest, it is particularly common in the Columbia Basin region of central Washington.

Anarta crotchii is found in the dry interior of the Pacific Northwest from southern British Columbia south.

The global range extends from British Columbia and Saskatchewan south to California and Colorado.

This species flies in the spring, usually from early April to early June. It is nocturnal and comes to lights.