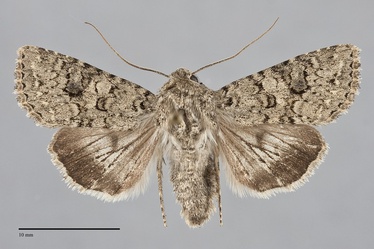 Anarta inconcinna is a slightly yellow-tinted, tan-gray, medium-sized moth (FW length 14 - 15 mm) that is restricted to east of the Continental Divide in northeastern British Columbia in our area. It has a contrasting dark reniform spot and a two-toned hindwing. The forewing color is nearly even, sometimes slightly darker gray in the terminal area except at the apex. The basal, antemedial, and postmedial lines are dark gray to black, double with filling of the ground color. The basal and antemedial lines are moderately irregular. The latter is weakly excurved. The median line is gray, oblique toward the base from the reniform spot to the costa and closely parallel to the postmedial line below the spot. The postmedial line is fainter than the other lines, moderately scalloped often with pale and black spots on the veins near the tips of the teeth in many specimens, drawn toward the base on the costa, gently and broadly excurved around the reniform spot, touching the lower spot, and angled toward the base below the spot. The subterminal line is pale ochre-gray, irregular with an offset toward the base below the costa and a weak W-mark on M3 and CuA1. It is preceded by dark gray wedges on the mid-wing. The terminal line is a series of dark gray lunules between veins. The fringe is weakly checkered ground color and gray. The orbicular and reniform spots are outlined in thin black. The orbicular spot is incomplete anteriorly, round, filled with the ground or slightly lighter color. The reniform spot is moderately large, weakly figure-eight-shaped with a thick black posterior edge, mostly filled with smoky purplish gray. The claviform spot is small, black, filled with the ground color. The hindwing is pale tan with a moderately well-defined dark gray marginal band with small spots or a line of the ground color near the anal angle, discal spot, and veins. The hindwing fringe is light tan with a darker yellow and gray base. The head and thorax match the forewing, often with gray transverse bands on the collar. The eye is covered with fine hairs. The male antenna is bead-like.

This species should only be expected east of the Rocky Mountains. It is more yellow-gray than our other steppe Anarta species and has more contrasting lines and spots than these species. It is most likely to be confused with Anarta alta in this portion of British Columbia. It is darker brown-gray, often has an ocellus in the orbicular spot that S. inconcinna lacks. The male of A. alta has a long tapering clasper of the left valve that reaches the cucullus; that of A. inconcinna is much shorter. These differences can be observed after removing the scales from the valves with a small brush. Anarta trifolii could potentially be confused with A. inconcinna. It is more tan in color without a yellow tint, lacks the dark lower reniform of A. inconcinna, and has a whiter hindwing base.

This species has been known under several different names until recently.  It was considered to be a subspecies in the 1983 Moths of North America Check List and was raised to species status in the Moths of Canada web site as Discestra montanica (McDunnough). The species name was corrected to inconcinna for the Lafontaine and Schmidt Check List (2010), but it was listed in the genus Scotogramma.  The generic placement was changed to Anarta in a subsequently published revision (Lafontaine & Schmidt 2011).

This species is endemic to the dry prairies of the Great Plains, and flies over short-grass prairie near the Peace River.

Scotogramma inconcinna has been found along the Peace River in northeastern British Columbia.

This species is found on the Great Plains. Records from southern Alberta and northern New Mexico are shown on the Moth Photographers Group.

The flight period of S. inconcinna is the summer. It has been collected in early July in British Columbia.