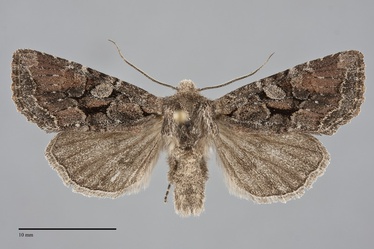 Orthosia segregata is a dark gray medium-sized moth (FW length 16 - 18 mm) that flies in boreal forests of the Pacific Northwest during the spring. It has subtle red-brown flush in the median and subterminal areas, a pale-gray filled orbicular spot, and often has strong black markings including a bar-like claviform spot that connects the antemedial and postmedial lines. The ground color has a slight olive tint, with distinct red-brown areas are present near the spots in the cell and in the adjacent subterminal area and a slightly purplish gray terminal area. The lines are darker gray and filled with light gray. The basal, antemedial, and postmedial lines are similar in prominence. The antemedial and postmedial lines approach each other in the posterior wing causing the median area to be narrow from the level of the claviform spot to the trailing margin. The median line is usually faint or absent. The subterminal line is similar to the filling of the other lines. It is smooth and forms a slight W-mark toward the margin on veins M3 and CuA1. The orbicular spot is ovoid and filled with light whitish gray. The reniform spot is weakly figure eight-shaped and its posterior portion touches the postmedial line. Over half of specimens are strongly marked with jet black markings. These include a short basal dash, black along the portions of the lines abutting the median area, the outlines of the orbicular and reniform spots, a series of black wedges between the veins medial to the subterminal line, and a bar-like claviform spot that spans the median area. The hindwing is medium gray, darker toward the outer margin, with dark discal spot and veins and a lighter fringe. The head and thorax are dark gray with slight barring of the collar and lacks ridges or tufts. The eye is covered with fine hairs. The male antenna is strongly biserrate.

This species can usually be identified by the combination of gray and reddish forewing color, pale orbicular spot, and early flight season. Specimens that are heavily marked with black are usually easiest to identify because of the bar-like claviform spot. They are most similar to Lacanobia grandis, a species that can occur in the same habitat but usually flies slightly later in the season, but lacks the very strong W-mark of the subterminal line that reaches the outer margin that is present in L. grandis. Specimens that lack black can be mistaken for dull specimens of Orthosia revicta. The subterminal line of O. revicta has an inner lighter portion and a darker red-brown lateral component. In O. segregata most specimens have only a light component, but the few specimens with a darker portion have it medial to the light part opposite of O. revicta. In addition, O. revicta lack the pale filling of the orbicular spot and usually have a well-developed median line that O. segregata lacks.

This species is widely distributed across Canada in moist forest habitats, extending westward to the northern Rocky Mountain region including the Blue Mountains.  In the Pacific Northwest, it is common in mixed hardwood-conifer forests or spruce-fir forests at middle to high elevations where buffalo-berry is common.

Orthosia segregata is found across southern and central British Columbia as far west as the Skagit River Valley south of Hope. It is found in northeastern Washington as well as in the Blue Mountains. It is limited to the Blue Mountains in eastern Oregon.

This species ranges across the boreal part of North America as far east as Ottawa, Ontario.

This species is a foodplant specialist feeding on buffalo-berry (Shepherdia spp.) in the Elaeagnaceae.

This species flies in the spring, usually slightly later than many of our other Orthosia species. The records from our region are from April to mid-May. It is nocturnal and comes to lights.