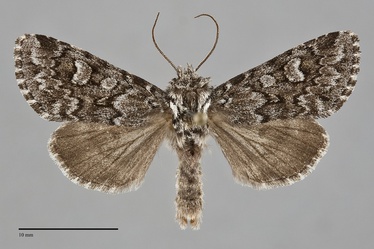 Lasionycta taigata is a medium-sized noctuid moth (FW length 15 - 17 mm) that occurs in bogs in northeastern British Columbia in our region. It has strongly patterned light and dark gray forewings and a gray hindwing. The forewing ground color is powdery gray, slightly darker in the median area than elsewhere. The basal, antemedial, and postmedial lines are black and light gray; the black portions of the latter lines abut the median area. Both are irregular in shape, with the black component of the postmedial line strongly serrate on the veins. The pale bluish gray subterminal line is preceded by black at the costa and followed by black elsewhere. The fringe is checkered light and dark gray. The spots are black. The orbicular and reniform spots are filled with light gray peripherally and slightly darker gray centrally. The reniform spot is kidney-shaped and fairly large. The claviform spot is moderately large. The hindwing is brown-gray, darker gray toward the margin, with darker discal spot and diffuse postmedial line. The hindwing fringe has a gray base and white margin. The head and thorax are grizzled gray with dark and light borders on the collar and tegulae. The surface of the eye is covered with fine hairs. The male antenna is biserrate.

This species is patterned similarly to several species in the genus Polia, particularly Polia propodea, but is much smaller. Within the genus Lasionycta, it is most similar to Lasionycta mutilata and Lasionycta secedens in our area. The latter species has a similar forewing, but has a yellow and black hindwing. Lasionycta mutilata is smoother blue-gray and often has patches of yellow or greenish scales in the median area that are lacking in L. taigata. In addition, its lower reniform spot touches the postmedian line. These markings are separate in L. taigata.

This species is widely distributed across the taiga forest zone of northern Canada, and favors spruce bog habitats.

Lasionycta taigata has been collected in bogs north of the Peace River in northeastern British Columbia. It is likely to be more widely distributed in the northern part of the province, especially in the northeastern corner.

The range of this species includes most of the boreal zone of Canada. It ranges from central Yukon, northern Manitoba, and Labrador south to west-central Alberta, northern Minnesota, and northern Maine.

No information is presently available regarding larval foodplants of this species, but it may favor huckleberries (Vaccinium spp.) in the Ericaceae, considering the boggy habitat.

This species flies during the summer and has been collected in June and July. It is nocturnal and comes to lights.