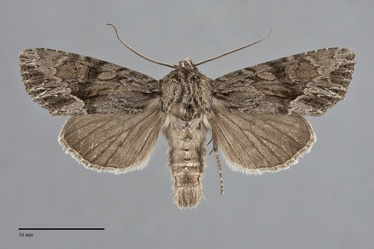 Apamea cinefacta is a medium-sized moth (FW length 15–18 mm) with a medium-dark tan-gray forewing with light blue-gray suffusion and a pattern that includes basal and median dashes, an oval orbicular spot, and strong W-mark of the subterminal line. The ground color is slightly mottled medium-dark gray-tan with a slight olive tint. The wing base proximal to the antemedial line, the subterminal area, and the posterior median area are suffused with light blue-gray, usually strongest opposite the cell and near the posterior margin in the subterminal area. The terminal area except the apex is darker gray divided into two patches where the subterminal area reaches the outer margin on the mid-wing. Black basal and median dashes are present, with a similar mark along the posterior margin near the antemedial line in many specimens. The distal veins are dark. The transverse lines are double on the costa, gray to black and pale blue-gray elsewhere, darkest abutting the median area. The antemedial line is zigzag, projected toward the outer margin in the fold. The median line is dark gray, faint to strong, angled from the costa to the lower reniform spot, bent below the spot, and parallel to the posterior postmedial line. The postmedial line is scalloped, angled toward the base, on M2 and CuA2. A prominent segment in the fold is strongly more strongly angled toward the base than the adjacent line. The subterminal line is pale gray to white, with a strong pale W-mark to the margin on veins M3 and CuA1 with strong black wedges preceding this mark. The terminal line is a series of black triangles. The fringe is checkered light and dark gray. The orbicular spot is oval, outlined in gray to black but often open anteriorly, filled with the ground color to pale blue-gray and a faint ocellus. The reniform spot is kidney shaped, strongly outlined medially and faint elsewhere, filled with the ground color and gray spot at the lower end. The claviform spot is gray or black. The hindwing is tan-gray with slightly darker margin and darker faint discal spot, diffuse postmedial line, veins, and terminal line. The hindwing fringe is white with a yellow and gray base. The head and thorax are gray-tan with faint black lines across the mid-collar and gray edges of the tegulae. The male antenna is bead-like.

This species can be recognized by the combination of olive-tinted gray-tan color, light blue-gray suffusion, black and light blue-gray postmedial line that is strongest in the fold, streaked margin with a strong W-mark, and oval orbicular spot. It is most similar to Apamea spaldingi and Apamea commoda. The former species flies with it in early spring. They are easy to tell apart by the hindwing, pale with a well-defined dark margin in A. spaldingi and darker tan-gray in A. cinefacta. Apamea commoda parcata flies in similar habitats a few weeks later in the season. It has less light gray shading on the forewing and tends to have a more elongate orbicular spot that is less likely to contain light blue-gray shading. Early-season members of the tribe Hadenini, Anarta fuscolenta and Anarta crotchii, have similar color and pattern to A. cinefacta and they fly together east of the mountains. Both of these Anarta species have prominent black claviform spots that can reach the postmedial line, but unlike in A. cinefacta, they don't form a dash or bar across the fold. Their postmedial lines do not have an angled black and light segment in the fold. Structurally, Anarta species have fine hairs on the eyes that Apamea lack.

The type locality of Hadena cinefacta Grote is Washington Territory.

This species is endemic to the West Coast in dry grasslands and open forests.  In the Pacific Northwest, it is common in dry open grasslands and oak savanna at low elevations west of the Cascades, ranging from virgin, native prairies to fairly disturbed grasslands.  East of the Cascades, it is found in dry, open ponderosa pine forests, juniper woodlands, and dry grasslands at middle elevations. At the base of the Steens Mountains in southeastern Oregon, it is common on open sagebrush steppe at low elevations.

Apamea cinefacta can be found from Vancouver Island in southwestern British Columbia through western Washington and Oregon. This species is restricted to native grasslands near the Gulf of Georgia in the northwestern part of its distribution. The range extends east in the steppes of eastern Washington, Oregon, and western Idaho

The range of A. cinefacta extends south through California and extreme western Nevada to the border with Mexico.

No information is presently available regarding the larval biology of this species, but it is probably a soil-surface feeding cutworm that feeds on short bunchgrasses or short rhizomatous grasses (Poaceae) based upon the habitat.

Adults fly in the spring, with most flying during May in our region. They are nocturnal and come to lights.