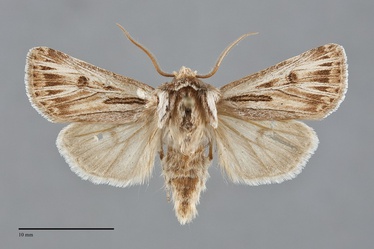 Agrotis daedalus is a rarely collected, streaky, small to medium-sized moth (FW length 14 - 16 mm) that is restricted to dunes and has been found near the Pacific Northwest in northern Nevada, where it flies during the spring. The forewing is pale red-brown to gray-brown, paler along the costa and many of the veins producing a streaky pattern. The streaks are accentuated by a series of dark wedges in the distal subterminal area and absence of the transverse lines.  The terminal line is a series of dark gray spots.  The fringe is light tan with a darker base.  The claviform spot is very long, black with central tan filling. The small orbicular and reniform spots are dark gray to black and smudged. The hindwing is pale cream to light gray, heavily suffused with gray in many specimens. The veins and discal spot are dark and the fringe is white. The head and thorax are similar in color to the forewing, usually with pale dorsal collar and lateral tegulae. The male antenna is moderately bipectinate.

This moth can be identified by its sand dune habitat, spring flight, and streaky forewing pattern lacking transverse lines, ill-defined orbicular and reniform spots, and a long claviform spot.  It could potentially be confused with Agrotis longicornis, which flies in dunes in southern Oregon during early summer.  This moth has transverse lines on its forewing, a shorter claviform spot, and a wide antenna in males.

Although this moth has yet to be found in our area, it should be sought in dune systems of southern Oregon and Idaho.

This species is widely distributed in sandy soil areas of the Great Plains, as in the Sand Hills of central Nebraska.  It may be common in such habitats.  It is rare and sporadic west of the Rocky Mountains.

Agrotis daedalus has yet to found in the Northwest, although it occurs near the southern border of our region in Nevada.

The range of this species includes the western Great Plains from Alberta and Saskatchewan to New Mexico and Texas.  It also occurs in the Intermountain region in northern Arizona, southern Utah, and northern Nevada.

No information is presently available regarding larval foodplants of this species, but it is probably a sand-burrowing cutworm that feeds on herbaceous vegetation based on the habitat.

The flight period of A. daedalus is the spring and early summer.  It has been collected from April to July across its entire range, but is most commonly found during May and June.  It is nocturnal and comes to lights.