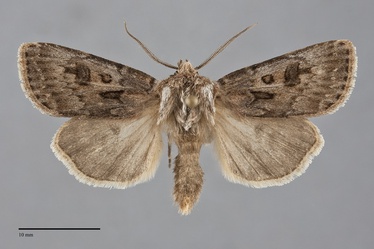 Agrotis ruta is a fairly large (FW length 18 - 21 mm), subarctic and alpine Agrotis species with brown gray forewings that have smudgy black, dark-filled forewing spots. The forewing ground color is medium dark brown-gray to dark blackish-brown, usually slightly darker between the basal and antemedial lines. The transverse lines are dark gray and double, filled with the ground color. The basal line is slightly irregular in shape and is oriented across the forewing. The postmedial line is moderately scalloped in is gently convex toward the outer margin. The pale subterminal line is slightly irregular and is preceded by a long series of smudgy dark gray to black wedges between the veins. All the forewing spots are smudged black and are filled with warm dark brown. The orbicular spot is small and round to oval in shape. The reniform is fairly large and kidney-shaped, occasionally with the posterior margin drawn toward the wing base. The claviform spot is small to medium-sized. The hindwing is pale gray with a slight yellow tint and gray smudgy discal spot, dark veins, and a submarginal band. The head and thorax are slightly lighter than the forewing, usually a mixture of light tan and brown gray areas. The male antenna is moderately bipectinate.

Agrotis ruta is unlikely to be confused with any other moth in its northern distribution. It is generally similar in color and pattern to Xestia ursae but is larger. Xestia ursae lacks the prominent claviform spot of A. ruta.

This species is widely distributed in the arctic and subarctic regions of Eurasia, Alaska, and Canada on open tundra with dwarf willows (Salix spp.) and in taiga spruce forests.  It extends southward in alpine habitats of the northern Rocky Mountain region.

This species occurs in eastern Asia as well as in most of subarctic North America. The North American records are from Labrador and northern Quebec and northern Manitoba to Alaska. The southern limit of the range is the Rocky Mountains of Alberta.

This species is on the wing from early July to mid-August. The adults are nocturnal and come to light in the brief subarctic night.