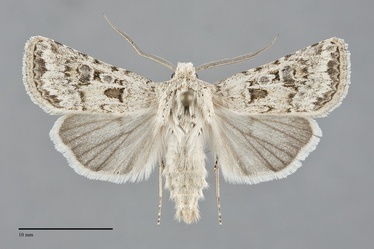 Agrotis orthogonia is a very light, dusty brown-gray, medium-sized (FW length 13 - 15 mm) Agrotis that flies in deserts in the fall. It has a bipectinate male antenna and a forewing with dark gray terminal area, lines, and spots. The forewing ground color is pale putty to light gray-brown, usually pale in our area, with scattered individual dark scales that produces a dusty appearance. The terminal area is darker gray. The transverse lines are black, double - although only the component nearest to the median area is strong in most specimens - and filled with the ground color. The antemedial line is irregular with a long lateral loop at the trailing margin. The postmedial line is dentate, slightly convex toward the margin near the reniform spot and then slightly obliqued toward the base to the trailing margin. The subterminal line is pale, preceded by a dark gray patch at the costa, and forms a broad "W" mark toward the margin on veins M3 and CuA1. The orbicular and reniform spots are black, filled with the ground color peripherally and dull gray centrally. The claviform spot is small to medium-sized, black and often filled with darker gray. The hindwing is dirty light gray, slightly darker toward the outer margin, slightly darker veins, and an entirely whitish fringe in males; slightly darker gray with a pale fringe in females. The head and thorax are uniformly colored like the head and thorax. The male antennae is bipectinate.

This species is unlikely to be confused with other Agrotis species, but resembles several late fall-flying desert Euxoa species. Most of these Euxoa species lack the combination of light brown-gray forewing with a dark terminal area and prominent claviform spot. Males have narrower antennae and these Euxoa females have sclerotized flange-like processes at the tips of the ovipositor lobes that are lacking in A. orthogonia (Lafontaine 2004).

Larva is smooth, pale yellow-gray dorsally and darker gray laterally with a pale mid-dorsal line and fine dark lateral lines.  It is illustrated by Lafontaine (2004).

This species is widely distributed on arid grasslands and rangelands throughout much of western North America, and is particularly abundant on dry short-grass prairie with sandy soils on the Great Plains.  In the Pacific Northwest, it is more narrowly restricted to alkali flats with saltbrush (Atriplex spp.) that are wet in the spring at low elevations in the Great Basin region.  It is usually absent from upland sagebrush steppe.

Agrotis orthogonia is found in the dry portions of south-eastern Oregon and southern Idaho in our region.

This species is widely distributed in western North America. It occurs on the Great Plains from southern Alberta, north-central Saskatchewan, and southwestern Manitoba to the Texas Panhandle. Its range extends through the Southwest to the eastern and southwestern portions of California.

This species is a soil-burrowing cutworm that feeds primarily on grasses (Poaceae).  It appears to prefer loose, sandy soils.

Agrotis orthogonia flies in late summer and fall. The Pacific Northwest records are from mid-August through early October. It is nocturnal and comes to lights.

This species has been a major agricultural pest on the Great Plains, devouring grain crops of barley, oats, and wheat during epidemic outbreaks.