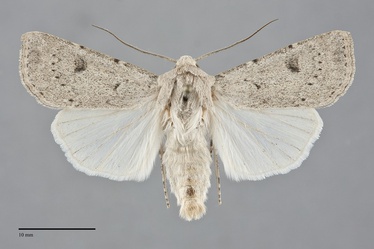 Agrotis vetusta is a medium to large moth (FW length 16–20 mm) that flies in dry steppe and open pine forest habitats. It has a uniform, powdery light gray forewing and a pure white hindwing. The forewing is dull, light gray with a powdery appearance due to a sprinkling of dark scales. The terminal area is slightly darker in some individuals. The antemedial line is slightly darker gray and irregular in shape. The postmedial line is dentate with the lateral tips of the "teeth" darker gray than the rest of the line. The orbicular spot is a small gray dot, white the reniform spot is filled with sooty gray. It is usually poorly defined and varies between boomerang-shaped and kidney-shaped. The claviform spot is absent. The hindwing is pure white in both sexes. The head and thorax match the forewing ground color. The male antenna is biserrate with stout branched fasciculations.

Agrotis vetusta cannot be confused with any other Agrotis species in our area. It is most similar to Euxoa catenula, a smaller moth with a thinner forewing shape. Euxoa catenula is usually more cream-colored with a warm tint, not even gray as in A. vetusta. Also, specimens of E. catenula with nearly white hindwings have a series of terminal dots that A. vetusta lacks.

The type locality of Porosagrotis vetusta race mutata Barnes and Benjamin, considered a synonym of vetusta, is Kaslo, British Columbia.

This species is widely distributed in open habitats throughout much of North America.  In the Pacific Northwest, it is largely restricted to disturbed agricultural habitats at low elevations east of the Cascades such as alfalfa fields, and does not usually occur in more natural habitats.  Thus, this species may not be native to the Pacific Northwest, but may have spread into the region with the spread of cultivated agricultural habitats.

Agrotis vetusta is widely distributed in dry interior habitats from southern and eastern British Columbia south in our region. It has a very restricted distribution west of the Cascades. It has only been found there on the north-eastern part of the Olympic Peninsula and on the northern Oregon coast.

This species is found from coast to coast in North America but is most widely distributed in the West. The eastern distribution is predominantly near the Atlantic Seaboard and near the Great Lakes. Western records extend from central Manitoba and Alberta to Texas and the southern Baja Peninsula in Mexico. Disjunct northern records extend from southern Northwest Territory across southern Yukon Territory to south-central Alaska.

This species is a soil-burrowing cutworm that feeds on general herbaceous vegetation in such families as Fabaceae, Brassicaceae, Apiaceae, Chenopodiaceae, and Solanaceae.  It appears to prefer loose, sandy soils.

Adults have been collected from mid-July through the fall months but are most common in late August and September. This species is nocturnal and comes readily to lights.

This species is usually a minor pest in agricultural crops, although epidemic outbreaks may occasionally take place.