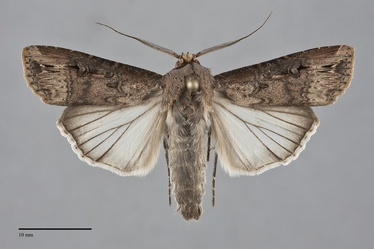 This species can be identified by the long wing that is blackish brown medial to the postmedial line and paler brown distally with three black wedge-shaped marks on the distal to the reniform spot. No other species in our area has this combination of features.

Larva is smooth, gray to black without markings.

This species is migratory and distributed throughout most of the world.  In North America, it over-winters in Mexico and the southern United States, migrating northward in the spring.  Thus, this species is not a permanent year-round resident in the Pacific Northwest.  It may become common in mountain meadows at higher elevations in late summer, particularly during warm, dry years.  However, the primary habitat is disturbed agricultural and urban areas at low elevations both west and east of the Cascades, and it may attain epidemic outbreaks in these habitats.

Agrotis ipsilon is found throughout our region as far north as southern British Columbia.

This species is found throughout most of the world except in the arctic and subarctic zones of the Northern Hemisphere and Antarctica.

This species is a soil-burrowing cutworm that feeds on general herbaceous vegetation in such families as Fabaceae, Asteraceae, Brassicaceae, Rosaceae, Solanaceae, Malvaceae, Chenopodiaceae, Apiaceae, and Poaceae, and is often a major pest in various agricultural crops.  The larva is one of the few Lepidoptera that is largely immune to the pathogenic soil microbe, Bacillus thuringiensis.

Adults are migratory, and migrate northward from Mexico in the spring with a return migration in the fall.  Thus, adult moths that emerge in the Pacific Northwest in late summer are non-reproductive, and do not become reproductive until they return to agricultural lands in Mexico during the fall and winter. The moths have been collected beginning in May and June in our area, but do not become common until late July. This species flies into late fall, with records through November. They are nocturnal and come to light.

This species is a major agricultural pest feeding on many herbaceous crops, particularly in eastern North America.  In the Pacific Northwest, it is usually a minor pest, except during warm, dry years when it may attain epidemic outbreaks.