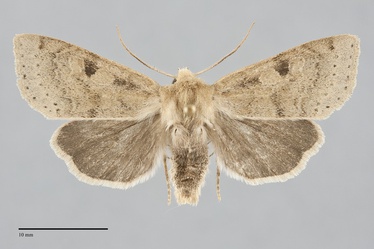 Orthosia arthrolita is an ochre-brown medium-sized moth (FW length 16 - 18 mm) that flies in southwestern Oregon in the early fall. It has smoky gray between the orbicular and reniform spots. The forewing ground color is even but appears slightly powdery due to scattered dark scales. A black spot is present at the base. The cell is filled with powdery gray between the spots; this filling extends medial to the antemedial line in heavily suffused specimens. The antemedial and postmedial lines are pale ochre accentuated by powdery gray medial to the antemedial line and along the lateral aspect of the postmedial line which outlines its even sawtooth lateral margin. The antemedial line is nearly perpendicular to the wing and the postmedial line is broadly convex toward the outer margin. a powdery median line is present in most specimens. The subterminal line is a series of dark dots between the veins, slightly stronger than the similar terminal line. The orbicular and reniform spots are large, pale and filled with the ground color. The lower reniform spot contains gray similar to the adjacent median line. The claviform spot is absent. The hindwing is sooty dark gray with a pale slightly yellow fringe. The head and thorax are colored like the forewing and are smooth without ridges or tufts. The eye is covered with fine hairs. The male antenna is biserrate with triangular segments.

This species can be identified by its ochre forewing color, the dark gray area between the pale-filled large spots, and the sooty dark hindwings with a pale fringe.

This species is narrowly limited to oak woodlands, mixed hardwood-conifer forests with oaks, or brushlands at middle to high elevations in the Siskiyou region of northern California and southwestern Oregon.  It is usually uncommon to rare in the Pacific Northwest.

Orthosia arthrolita is confined to the forests of the Siskiyou Mountains in southwestern Oregon in the Pacific Northwest.

The range of O. arthrolita extends south through California to near the border with Mexico. It is found along the east slope of the Sierra Nevada as well as along the Pacific Coast.

No information is presently available regarding larval foodplants of this species, but it may be a specialist feeding on oaks (Quercus spp.) in the Fagaceae based upon the habitat.

This species flies in the fall unlike all of our other Orthosia species except Orthosia mys. It has been collected during September in our region. This species is nocturnal and comes to lights.