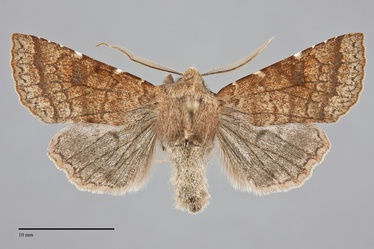 Orthosia ferrigera is an attractive dark orange brown medium-sized moth (FW length 15 - 17 mm) that flies in oak forests in the early spring. It has a pattern of dark lines and veins. The outer margin of the forewing is scalloped and the apex is slightly pointed. The ground color is powdery and slightly mottled medium-dark orange-brown with a variable reddish cast. The median area is usually slightly darker due to a red-brown median line, and there is a similar colored shade medial to the subterminal line. The veins are dark producing a net-like pattern. The basal and antemedial lines are similar to each other, comprised of dark red-brown and pale components, and are nearly straight. The postmedial line is dentate with dark narrow teeth on the veins. It is weakly convex laterally opposite the reniform spot and slightly concave toward the base below the spot. The pale subterminal line is usually evident. It is smooth with a slight W-mark on veins M3 and CuA1. The terminal line is a series of gray crescents between the veins. The fringe matches the ground color. The reniform spot is bar-shaped or ovoid with a very weak lateral indentation. It is warm orange or yellow-orange laterally and the center is filled with dark orange gray similar in darkness to the subterminal shade. The orbicular and claviform spots are obsolete. The hindwing is pale yellow to red-brown with a heavy suffusion of dark gray scales. The discal spot is dark gray and a weak postmedial line is usually evident. The hindwing margin is scalloped, usually accentuated by a dark terminal line. The hindwing fringe is light pink. The head and thorax are uniform orange gray to pinkish gray. The eye is covered with fine hairs. The male antenna is strongly bipectinate.

This species could potentially be confused with any of our three species of Perigonica. They typically have a more angular outer margin to the forewing and a series of dark spots on the veins lateral to the postmedial line. The male antennae of Perigonica angulata are more narrow than those of O. ferrigera.

Orthosia ferrigera is found throughout western Oregon in association with oak forests. The range extends east through the Columbia Gorge and then north along the east slope of the Cascades to Kittitas County, Washington. It has been found on Vancouver Island but has not been collected in western Washington.

The range of O. ferrigera extends south through California to the vicinity of Los Angeles. It is predominantly found along the coast but occurs in the northern Sierra Nevada.

This species is a foodplant specialist feeding on oaks (Quercus spp.) in the Fagaceae.  The primary larval foodplant in the Pacific Northwest is Oregon white oak (Q. garryana), but California black oak (Q. kelloggii) and canyon live oak (Q. chrysolepis) may also be important foodplants in southwestern Oregon.

Adults of O. ferrigera fly in the early spring like most members of the genus. They have been found in March and April in our area. This species is nocturnal and comes to lights.