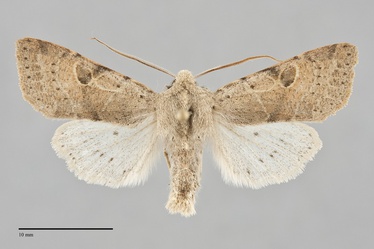 Orthosia behrensiana is a sandy light yellow-brown medium-sized noctuid moth (FW length 16 - 18 mm) with large pale orbicular and reniform spots that touch each other like a pair of asymmetric spectacles. The forewing has a slightly pointed shape although the apex is slightly rounded. The color is varies from ochre-brown, sometimes with a slight orange tint, to darker gray-brown and is slightly darker medial to the subterminal line the costa but is uniform elsewhere. The wing is heavily suffused with darker scales, especially in darker specimens producing a sand-like or salt-and-pepper look. The antemedial and postmedial lines are thin and slightly darker than the ground color and are evident as the lighter ochre filling. Both antemedial and postmedial lines are smooth, the latter oblique across the wing and the latter smoothly undulating and broadly convex toward the outer margin across most of the wing. The median line is gray, either faint across the entire wing or much darker between the posterior reniform spot and the costal margin. Some specimens have black spots along the forewing lines, most prominently as small dots lateral to the postmedial line and as a broad mark from the reniform spot to the costa. The subterminal line is pale, faint or absent. A series of small spots between the veins forms the terminal line. The orbicular and reniform spots are large and touch each other in the cell and the medial orbicular spot overlaps the antemedial line in most specimens. Both are filled with the ground color, although the reniform spot is filled with the color of the median line in specimens in which this line is dark at the spot. The claviform spot is absent. The hindwing is pale whitish gray with an even sprinkling of gray scales, a small dark discal spot, dark veins, a postmedial line that is marked by darker gray on the veins, and a terminal line that is a series of spots between the veins. The hindwing fringe is white. The head and thorax are brownish gray with a weak median ridge. The eye is covered with fine hairs. The male antenna is weakly bipectinate.

This species can be identified by its light ochre-brown to gray-brown color and large touching forewing spots. Other Orthosia species with light brown color, such as Orthosia pacifica, has separate spots that are separate from each other. Other spring-flying moths with similar color, including Cissusa indiscreta and Perigonica angulata, also lack this feature and differ structurally. Cissusa indiscreta is in the family Erebidae and lacks hairy eyes, and Perigonica angulata has angular outer margins on the forewings.

This species is narrowly endemic to the West Coast.  It is common and widely distributed in California and southwestern Oregon within coastal rainforests, mixed hardwood-conifer forests or brushlands at middle to high elevations in the Siskiyou Mountains and along the west slope of the Cascades, and in dry oak savanna or oak woodlands at low elevations.

Orthosia behrensiana is restricted to southwestern Oregon in our region.

The range of O. behrensiana includes most of California south of our region.

Based on its habitat, this species is probably a specialist, feeding on various Fagaceae.  These could include various oaks (Quercus spp.) in oak woodlands or mixed hardwood-conifer forests with oaks at low elevations, golden chinquapin (Castanopsis chrysophylla) at higher elevations along the west slope of the Cascades, and tan oak (Lithocarpus densiflorus) in coastal rainforests. The California Oak Disease and Arthropod Database indicates that it (listed under an old name, O. macona) is known to feed on Quercus chrysolepis.

Orthosia behrensiana flies in the spring, with records from March to May in our region. It is nocturnal and comes to lights.