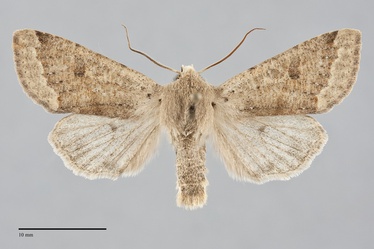 Orthosia pacifica is a mottled light ochre-brown to orange-brown medium-sized spring-flying moth (FW length 17 - 20 mm) that occurs in the western part of the Pacific Northwest, including on both sides of the Cascade Mountains. The forewing ground color is light ochre-tan, usually orange-tinted, with a powdery or sandy appearance due to a heavy sprinkling of darker brown scales. The terminal area is often slightly lighter than the rest of the wing. The median area is darker due to a orange-brown to gray-brown median line, and there is usually a similar dark shade medial to the subterminal line. Two black dots are present at the wing base, one at the attachment and one at the base of the cell. The basal, antemedial, and postmedial lines are absent or very weak. A series of dots on the veins is often present at the postmedial line, and there are dots between the veins at the terminal line. The pale ochre subterminal line is usually complete and has a mildly irregular course. The orbicular and reniform spots are pale and moderately large. The orbicular size is the more obscure of the spots, varies in shape from round, oval, to irregular, and is filled with the ground color. The reniform spot is usually filled with gray and appears dark. The claviform spot is absent. The hindwing is yellowish gray with a suffusion of gray scales and a dark discal spot. The fringe is pale whitish gray. The head and thorax are brownish gray without tufts or ridges. The eye is covered with fine hairs. The male antenna is strongly biserrate to weakly bipectinate.

This species can be confused with Orthosia hibisci, a very common and widespread moth, and Orthosia behrensiana which is restricted to southwestern Oregon in our region. It can be told from O. hibisci by its uniform warm brown color, at least partially gray in O. hibisci, and by the black dot at the wing attachment that is lacking in O. hibisci. Orthosia behrensiana has very large pale orbicular and reniform spots that touch in the cell, not separate as in O. pacifica.

Larva is smooth, green with many fine white dots, a thin white lateral line, and a broad white transverse band at the tail.  It is illustrated by Miller & Hammond (2003).

Orthosia pacifica is found in the western portion of the Pacific Northwest from southwestern British Columbia to southern Oregon. Unlike most species that have a western distribution, O. pacifica occurs along the east slope of the Cascade Mountains in Oregon and Washington.

The distribution of O. pacifica extends south to near the border with Mexico through California. It is most widespread along the Pacific Coast but also occurs in the northern Sierra Nevada.

This species is a generalist feeding on many kinds of hardwoods, but appears to prefer oaks (Quercus spp.) in the Fagaceae, snowbrush (Ceanothus spp.) in the Rhamnaceae, and madrone (Arbutus menziesii) and manzanitas (Arctostaphylos spp.) in the Ericaceae.

Like most other members of the genus Orthosia this species flies in the spring. It has been collected from early March to mid-May in our region. It is nocturnal and comes to lights.