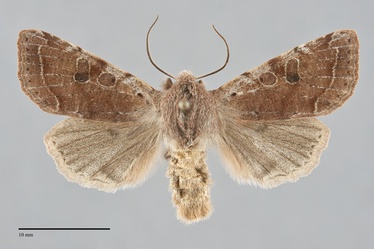 Orthosia hibisci is an abundant moth in most shrubby or wooded habitats throughout our region, flying in the early spring. It is a medium-sized moth (FW length 17 - 19 mm) with mottled dull gray, slightly bluish gray, or dark red-brown forewings with large pale forewing spots and a light subterminal line. The ground color is slightly bluish gray with a powdery appearance due to scattered darker scales and a highly variable pattern of dark red-brown mottling ranging from very limited with red-brown median line and shading medial to the subterminal line to completely suffused with red-brown with barely any residual gray areas. A black spot is located at the base of the cell, but there are no spots at the attachment of the wing to the thorax.The basal and antemedial lines are red-brown. The latter is broadly convex but drawn toward the base at the veins. The postmedial line is scalloped, very thin, and evident mostly as a series of dots on the veins at the tips of the teeth. The pale ochre subterminal line smooth and prominent. It is preceded medially by a red-brown shade. The terminal line is a series of small dots between the veins. The large orbicular and reniform spots are similar pale ochre. Both are filled with the ground color to red-brown, although the posterior portion of the reniform spot is darker gray. The claviform spot is lacking. The hindwing is medium-dark gray-brown with a heavy suffusion of dark gray scales, darker discal spot and veins, and a light whitish gray to slightly pink fringe. The head and thorax are mouse-gray to reddish-gray, lacking ridges or tufts. The eye is covered with fine hairs. The male antenna is strongly biserrate.

This species can usually be identified by its gray and dark red-brown forewing with large light orbicular and reniform spots. It resembles Orthosia pacifica with which it occurs on the east slope of the Cascades and further west, but this species is mottled ochre-brown and has a black spot at the wing base that O. hibisci lacks.

Larva is smooth, green with fine white dots, and with thin white dorsal, subdorsal, and lateral lines.  It is illustrated by Miller & Hammond (2003).

This species is common to abundant in moist forest, riparian, agricultural, and urban habitats throughout most of North America.  In the Pacific Northwest, it occurs in coastal rainforests, mixed hardwood forests, and mixed hardwood-conifer forests at low to middle elevations west of the Cascades, spruce-fir forests at high elevations along the summit of the Cascades and Rocky Mountain regions, ponderosa pine forests east of the Cascades, in riparian zones along creeks and rivers, and in disturbed agricultural and urban areas.

This species is generally distributed throughout all of the Pacific Northwest except in the driest of desert habitats east of the Cascades.

This species is generally distributed throughout most of North America except in desert regions.

This species is an extreme generalist feeding on many kinds of hardwoods in the families Aceraceae, Ericaceae, Betulaceae, Rhamnaceae, Rosaceae, Caprifoliaceae, Fagaceae, and Salicaceae.

Epidemic outbreaks of this species in commercial fruit orchards have caused serious defoliation to crops of apples, cherries, and blueberries.