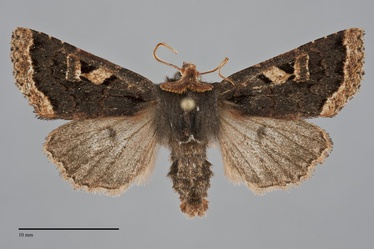 Orthosia praeses is a common dark reddish-brown medium-sized noctuid moth (FW length 16 - 18 mm) that flies in forests of the western part of the Pacific Northwest in very early spring. It has a variable forewing color and pattern that has fused orbicular and reniform spots and a dark brown thorax with a light collar. The apex of the wing is slightly pointed and the outer margin is slightly scalloped. The forewing color is variable, most commonly dark reddish brown or blackish brown and less often mottled and speckled light red-brown. Most color forms have a lighter terminal area that is often ochre-tan or orange-brown, but the terminal area can be the same shade as the rest of the wing. The subterminal line is pale yellowish to light red-brown and is usually prominent. It is often preceded by darker red-brown or black. The other transverse lines are usually absent or inconspicuous, even at the costa, although the scalloped postmedial line is visible in some specimens. The orbicular spot is diamond-shaped or oval and is fused to the weakly indented reniform spot. These spots can be prominent due to lighter yellowish to light red-brown filling, or can be practically invisible if filled with the ground color. Some specimens have the cell outside the spots filled with jet black which accentuates the filling of the spots. The claviform spot is absent. The hindwing is pale gray with a slight reddish hue and is powdery due to a suffusion of dark scales. The discal spot is dark gray, as are the veins. The hindwing margin is scalloped with a thin gray terminal line. The fringe is light reddish, even in specimens that are darkly suffused with gray. The top of the head and collar and smoothly light pinkish to yellow brown, contrasting with the rest of the thorax which is red-brown to dark brown. The eye is covered with fine hairs. The male antenna is moderately bipectinate.

Although very variable O. praeses can usually be recognized by its dark red-brown color, fused forewing spots, and light thoracic collar that contrasts with the darker central thorax.

This species is narrowly endemic to the West Coast in moist to dry forest habitats.  In the Pacific Northwest, it is particularly abundant in coastal rainforests and mixed hardwood-conifer forests of the Coast Range and along the west slope of the Cascades at low to middle elevations.  It is also common in mixed hardwood forests, oak woodlands, and in oak savanna at low elevations west of the Cascades. This species may be intolerant of particularly cold, freezing temperatures during the winter east of the Cascades.

Orthosia praeses is distributed west of the Cascade Mountains from southwestern British Columbia to southern Oregon.

The range of this species extends south through western California to the border with Mexico. It is found most commonly along the Pacific Coast but also occurs on the west slope of the Sierra Nevada.

This species appears to be a generalist feeding on many kinds of hardwoods including Spiraea spp. and oceanspray (Holodiscus spp.) in the Rosaceae, and snowbrush (Ceanothus spp.) in the Rhamnaceae.

Orthosia praeses, like most other members of the tribe Orthosiini, flies in the spring. It is one of the earliest moths to emerge each year. The records from our area extend from early February to mid-April. This species is nocturnal and comes to lights.