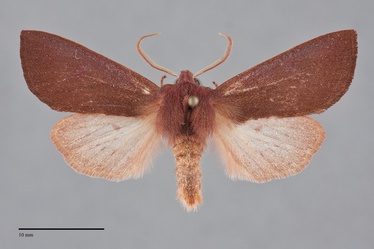 Orthosia mys is an attractive medium-sized (FW length 16 - 19 mm) even dark brownish red moth that flies along the Pacific Coast in the late fall. It has a light pink hindwing and a forewing with a pointed apex and smooth rounded outer margin. The ground color is even, very similar to madrone bark in color. Some specimens have slightly darker filled orbicular and reniform spots, but the transverse lines are completely missing in most specimens. A few individuals have a series of small spots on the veins at the position of the postmedial line. The hindwing is light pink with slightly darker pink veins and discal spot. The head and thorax are uniform and match the forewings. The thorax has a weak median crest. The eyes are covered with fine hairs. The male antenna is broadly bipectinate.

This red and pink species cannot be confused with any other fall-flying moth in our area.

Larva is smooth, brick red with dark brown shadings.  It blends closely with the bark of the madrone and manzanita foodplants, and is illustrated by Miller & Hammond (2003).

Orthosia mys is found west of the Cascades as far north as Vancouver Island in our area. It is most common along the immediate coast in the northern portion of its range, but is widespread in western Oregon. It also occurs along the east slope of the Cascades in Oregon.

This species occurs throughout most of California. A single record from southeastern Arizona is shown on The Moth Photographers web site.

Adults fly in the late fall, unlike all other members of the tribe Orthosiini, except Orthosia arthrolita. The flight season is very late, beginning in October and extending well into November. An occasional specimen overwinters to fly in the early spring. This species is nocturnal and comes to lights.