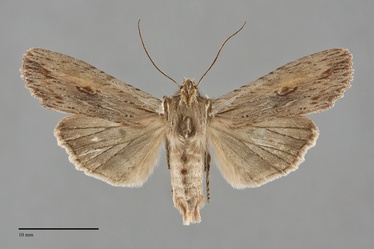 Lithophane amanda is an uncommon fall and spring-flying, medium-sized, narrow-winged, streaky, light gray-tan moth (FW length 17–20 mm) that lacks markings other than remnants of the posterior reniform spot, a gray bar in the median fold, and brown wedges in the distal subterminal area. The outer margin of the forewing is weakly scalloped. The color is light gray-tan on the costa and below the cell, light yellow-tan through the cell to the subterminal line, and streaky brown in the terminal area opposite the cell and near the anal angle. The anterior wing base is whitish gray. An ill-defined dark gray bar spans the median area in the fold. A very thin black basal dash is present. The wing appears longitudinally streaked due to dark on some of the veins and accentuation of the horizontal elements of the lines and spots. The antemedial and postmedial lines are gray, barely darker than the adjacent wing, and strongly zigzagged where visible. The position of these lines is marked otherwise by black spots on the veins. The position of the subterminal line is evident as a transition in color between the subterminal and terminal areas. It reaches the outer margin on the mid-forewing, separating the terminal area into two similar patches. Brown wedges precede the line near vein M2 and brown to gray spots are present in the fold. The orbicular and reniform spots are mostly evident as pale spots; however, the posterior reniform spot is outlined in brown. The hindwing is light gray-tan with gray discal spot, veins, and terminal line. The hindwing fringe is whitish to tan. The head and thorax are gray and tan with a black and white line across the distal collar. The tegulae are darker brown along the wing bases. Strong tufts are present on the anterior thorax. The male antenna is weakly biserrate.

This moth can be identified by its long wing shape, streaked gray and tan color, and the dark bar-like mark across the median area in the fold. It resembles a form of Lithophane petulca, but it has a broader wing, is darker brown and gray, and lacks the dark mark in the fold. Several other Lithophane species are streaked with dark marks in the fold, including Lithophane fagina, Lithophane itata, and Lithophane boogeri. All of them are gray without brown pattern elements.

Larva is smooth, light blue-green with a narrow white lateral line.  It is illustrated by Miller & Hammond (2003).

This species is widely distributed across Canada and southward through western North America in wet forests and bogs.  In the Pacific Northwest, it appears to be more narrowly restricted to the riparian zone along creeks and rivers at low to middle elevations and is relatively uncommon.

Lithophane amanda is found throughout much of the Pacific Northwest on both sides of the Cascade Range. It occurs at least as far north as southern British Columbia.

This species is found across North America. It occurs in northern California. The range extends east across the Canadian Prairie Provinces, dips slightly into the Great Lakes region, and extends further east through southern Canada and northern New England.

This species is reported to be a foodplant generalist in eastern North America feeding on Betulaceae, Fagaceae, Rosaceae, and Salicaceae.  In the Pacific Northwest, however, it appears to be feeding mostly on willows (Salix spp.) in the Salicaceae.  Larvae may be partly carnivorous as well, feeding on insects and other caterpillars.

This is one of the "winter moths" that emerge from pupation in the fall, overwinter as adults, and mate and lay eggs during the spring. It has been collected from August until November in the fall and from late March until mid-May in the spring. This species is nocturnal and comes to lights and sugar baits in our area.