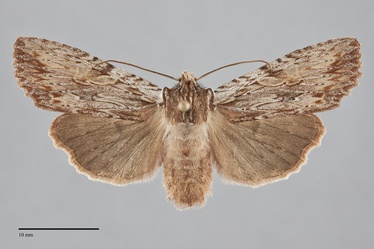 Lithophane petulca is a medium-sized to large moth (FW length 18–21 mm) with two forms, one wood-brown with a whitish costa and the other streaked gray-brown with red-brown markings near the distal margin. The forewing margin is scalloped, appearing saw-toothed due to the color pattern of the fringe. The dark form has a dark brown forewing, lighter brown in the anterior subterminal area lateral to the cell and near the outer margin on the mid-wing, and the entire costa is whitish gray with a striped appearance due to crossing brown lines. The lighter form is uniform streaky tan-gray, silvery in fresh specimens, with red-brown marks near the base, on portions of the lines and spots, and near the subterminal line. The fold in the median area is gray in some specimens, but rarely black as in many eastern North American populations. The antemedial and postmedial lines are weak except on the costa, double filled with the adjacent wing color, very strongly zigzagged where they are visible. The lateral postmedial line is marked by twin dark dots on the veins. The median line is brown, an oblique mark on the costa in both forms and sometimes evident as a blurry mark on the posterior wing in the light form. The subterminal line is luteous, most evident in the dark form, irregular with a moderately strong W-mark to the outer margin on M3 and CuA1. It is preceded by a series of red-brown wedges except on the costa. The terminal line is a series of prominent brown wedges. The fringe is red-brown with a saw-tooth pattern of gray at the end of the veins. The orbicular and reniform spots are partially outlined in red-brown or brown and are moderately large, touching in most specimens. They are filled with yellow-tan in the dark form and tan-gray in the light form. The orbicular spot is an elongate oval and the reniform spot is weakly hourglass-shaped. The tip of the claviform spot is evident near the postmedial line in some specimens. The hindwing and fringe are dark brownish gray with darker gray discal spot. The head and thorax match the ground color, with light and dark stripes across the head, collar, and lateral tegulae. The head and thorax are sculpted with angular tufts. The male antenna is biserrate.

The darker two-toned form of this moth (formerly called form "ferrealis"—see discussion of Lithophane forms in the L. innominata species account) is unmistakable in the Northwest. The lighter gray-brown form could potentially be mistaken for Lithophane amanda, an uncommon widespread moth in our region. The forewing of L. petulca is broader than that of L. amanda and lacks an indistinct gray mark in the median area that is characteristic of this species.

This species is widely distributed in moist forests throughout much of North America.  In the Pacific Northwest, it is abundant in moist hardwood forests and coastal rainforests at low to middle elevations west of the Cascades.  It is less common further east where it is mostly limited to low-and mid-elevation riparian zones along creeks and rivers.

Lithophane petulca is widely distributed in forests throughout much of the Pacific Northwest. It occurs widely west of the Cascades. East of the Cascades it is found in boreal forests of central and southern British Columbia, northeastern Washington, and the Idaho Panhandle.

This species is widely distributed in North America. It occurs in northern California along the West Coast. The range extends eastward across the Canadian Prairie Provinces. It is found from southern Canada to Illinois and South Carolina in the East.

This species appears to be a foodplant specialist feeding on Betulaceae in our region.  In the Pacific Northwest, it feeds mostly on alders (Alnus spp.) including both A. rubra and A. sinuata.  Eastern specimens have been reared on chokecherry (Prunus virginiana (Rosaceae)) (Forbes 1954). The larvae are partly carnivorous, feeding on insects and other caterpillars.

Lithophane petulca flies during the fall and early spring, overwintering as an adult. It has been collected from early September to early November in the fall and from mid-March until mid-May in the spring. It is nocturnal and comes to lights and sugar baits.