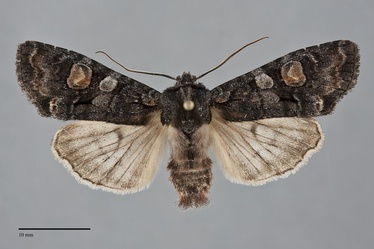 Lithophane dilatocula is our largest Lithophane species (FW length 22–23 mm). It is mottled blackish gray marked with large white orbicular and red-brown reniform spots. The forewing has a slight notch in the lateral margin above the anal angle. The color is nearly black, slightly lighter gray in the basal and medial median areas and sometimes also in the distal subterminal area and at the apex. A short black basal dash is bordered anteriorly by yellow and red scales and there is a short black bar in the distal fold. Dark rusty brown is present on the base of the posterior margin. The lines are black, double filled with dark gray. The basal line is evident on the costa. The antemedial line is slightly slanted toward the outer margin and weakly excurved with teeth toward the base on the veins. The median line is black, diffuse, slightly angled toward the outer margin. The postmedial line is toothed, most strongly lateral to the reniform spot where it is nearly straight; it is fused to the lower spot and the segment below it is angled toward the anal angle. The subterminal line is light gray to dull yellow, sinuous with an offset below the apex and a weak W-mark on veins M3 and CuA1. It is preceded by a brown shade and two indistinct black spots in the fold. The fringe is blackish-gray. The orbicular and reniform spots are large and are outlined in black. The orbicular spot is nearly round and is filled with whitish gray, slightly darker in the center. The reniform spot is broadly ovoid, filled with dark red-brown and blue-gray with a central ochre lunule. The claviform spot is large and ballooned but only the tip is evident at the black median bar; it is filled with slightly lighter gray than the adjacent wing. The hindwing is light yellowish tan with weak gray postmedial line and submarginal band and darker gray discal spot, veins, and terminal line. The fringe is white to light tan. The head and thorax are charcoal gray; the collar is the concolorous or dark red-brown. The male antenna is biserrate.

This moth can be identified by its large size and blackish forewing with rounded white-filled orbicular and rusty reniform spots. Lithophane pexata is similar but significantly smaller (FW length < 21 mm) and has darker filling of its orbicular spot and a darker gray hindwing.

This species is narrowly endemic to the West Coast in moist forest and riparian habitats.  In the Pacific Northwest, it is common in coastal rainforests and in mixed hardwood-conifer forests of the Cascades, Coast Range, and Siskiyou Mountains.  It is found along creeks and rivers in the southern Columbia Basin.

Lithophane dilatocula occurs along the western part of the Pacific Northwest from southwestern British Columbia to southern Oregon. The range extends east to the Blue Mountains in southern Washington.

The range of L. dilatocula extends south through California, both on the coast and in the Sierra Nevada. The southern limit is in the Transverse Ranges at Mt. Palomar (Powell and Opler 2009).

This species is a foodplant specialist feeding on alders (Alnus spp.) in the Betulaceae.  Larvae may also be partly carnivorous, feeding on insects and other caterpillars.

This moth, like other Lithophane species, emerges in the fall and overwinters as an adult. Although it has been collected in the fall in our area the majority of our records are from mid-March to mid-May. It is nocturnal and comes to lights.