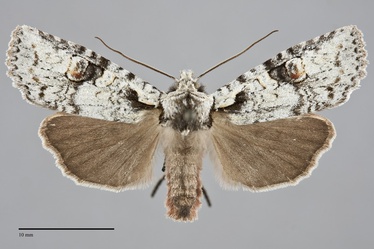 Lithophane baileyi is a late fall and early spring-flying, medium-sized moth (FW length 16–19 mm). The coastal form has light silvery green forewings, while those of the inland form are dark greenish gray. In both forms, the forewings are marked with a yellow and black basal dash and have red in the lower reniform spot. The forewing has a slight bend of the costa anterior to the reniform spot and a scalloped outer margin. The ground color of the inland form is dark gray with a slight green sheen, powdery silver gray on the anterior base, mottled lighter gray on the distal wing, and often with slightly lighter gray on the inner half of the wing. The coastal form is entirely whitish green-gray, nearly as light as the anterior base. Both forms have a black basal dash that is bordered anteriorly by yellow and posteriorly and distally by indistinct black. The basal, antemedial, and postmedial lines are dark gray but indistinct and incomplete, double filled with the color of the adjacent wing. The basal line is evident on the costa. The antemedial line is evident on the costa and is variable elsewhere, slightly slanted toward the outer margin and toothed toward the base on the veins when visible. The median lie is charcoal gray or brown-black, diffuse and usually prominent across the wing, slanted from the costa to below the reniform spot and then parallel and often fused to the posterior postmedial line. The postmedial line is toothed with dark spots on the veins at the tips of the teeth, usually evident on the costa, as the dots lateral to the reniform spot, and as as paired lines oriented at a right angle to the costa from the lower end of the reniform spot to the posterior margin. The subterminal line is pale gray, most evident in the dark form, diffuse and slightly irregular. It is preceded by a dark gray shade or a series of blurry black spots or wedges except near the costa. The terminal line is comprised of black spots between the veins which accentuate the scalloped margin. The orbicular and reniform spots are outlined in black. The orbicular spot is a slanted oval, slightly drawn toward the outer margin inferiorly, filled with whitish gray in both forms. The reniform spot is moderately large, oval or weakly indented on the outer or both sides, filled with light gray peripherally, the ground color centrally, and red inferiorly. The tip of the claviform spot is evident in some specimens. The hindwing is dark brown-gray with slightly lighter distal fringe. The thorax is dark to light gray with variable light and dark stripes on the head, collar, and tegulae. The male antenna is biserrate.

The light greenish coastal form of this species is distinctive and cannot be confused with any other moth in our area. The darker inland form can be confused with Lithophane pexata, but lacks a mark comprised of a white or yellow subterminal line and preceding black spots that is found in this species. In addition, L. pexata is charcoal gray without a green tint, has less complete pale filling if its orbicular spot, and has a dark brown shade before its subterminal rather than a gray or black shade as in L. baileyi.

The type locality of Graptolitha vivida Dyar is British Columbia, Wellington. This is currently considered to be a synonym of Lithophane baileyi Grote but is available for those wanting to recognize the distinctive Pacific Coast population of this moth.

This species is widely distributed throughout much of North America in moist forest habitats.  In the Pacific Northwest, it is mostly restricted to coastal rainforests at low to middle elevations west of the Cascades, and to mixed hardwood-conifer forests at higher elevations in the Cascades.  It is usually rare and sporadic, but may be locally common.  It is considered to be management sensitive, benefiting from the maintenance of riparian hardwood forests.

Lithophane baileyi is limited to forests west of the Cascades and southern British Columbia in our region.

This species is found in northern California along the West Coast. It is most widely distributed in the East where it occurs in southern Canada and the adjacent northern United States as well as in the southern Appalachian Mountains.

This species is a foodplant generalist feeding on hardwoods, including those in the families Ericaceae, Rosaceae, Betulaceae, and Salicaceae.  In the Pacific Northwest, it particularly feeds on huckleberries (Vaccinium spp.) in the Ericaceae.  Larvae are also partly carnivorous, and feed on insects and other caterpillars.

The adults of L. baileyi and other Lithophane species eclose during the fall and overwinter prior to mating and laying eggs. Pacific Northwest records of this species are from September and April. It is nocturnal and comes to lights.